I feel that at this point in my blog's lifetime, I should write an apology. By that I don't mean that I am going to say that I am sorry for the things I have written. Instead, what I mean by an apology is a defense of my beliefs and opinions, much like Plato's famous dialogue. The first belief I will defend (and the subject of this post) will be the existence of God, something that I hope will enlighten believers and unbelievers alike.

But first, a disclaimer: by God I do not (yet) mean the God of Mormon doctrine, body and all. A defense of that concept will hopefully come later. Instead, I mean God in the most general sense: a conscious entity from which all things derive their being (in one way or another).

To begin, let me ask you a question: does anything ever last? The inevitable answer that I have come to again and again is "no". Everything, whether it is a nation, a work of art, or even a human life will be ultimately extinguished, meaning that there is absolutely nothing you can do to ensure the immortality of you or anyone you love. You will die and be forgotten, and there is nothing you can do about it.

But there's more. Have you ever thought about how enormous the universe is? One article says that it is 28 billion light-years across (for perspective, a light-year is about 5 trillion miles). And in all that space, how much of it will you see in your lifetime? The cold, hard truth is that you as an individual will only experience a tiny fraction of one percent of this enormous place we live in. What's more, even the world close by is as inaccessible, as you will never live in the body of another, think another's thoughts, or see through another's another's eyes. This makes me exclaim: what a huge waste of space! You will only ever be you, and that you will only ever see one grain of sand on that beach we call the universe.

This infinite world tells me that I will never partake of it, as I am only a finite speck. When confronted with this limitedness, you'd think the only reasonable response would be hopelessness. But I have another way. To the whole universe, I scream "NO". I simply refuse to believe that it could be so poorly designed, and I insist that it must be run some other way. In order for the universe to be worth living in at all, there must be something that connects us to the infinite. This thing is God, and without it suicide is the only rational option.

The majestic truth at the heart of the idea of God is that I come from him, as everything that I am, along with everything else in the universe, derives its being from my magnificent creator. This means that my essence, who I ultimately am, is shared with all other things. I am a branch on the tree of which God is the trunk, a river which flows into a divine ocean. God is the promise that I am connected with the entirety of being, that I can take part in the infinite. Ultimately, in a universe without God, I am nothing; in one with God, I am everything.

I believe in God because the only universe worth living in includes him. Some may say this is wishful thinking, and they may be right. However, I don't think that this is a problem. Call me ignorant if you want, but I would rather be happy and deluded than hopeless and right.
Posted by Christian Swenson at 3:35 PM No comments:

John Winthrop (1587-1649) was an English-American lawyer famous for being one of the founders of Massachusetts. Here's a painting of him: 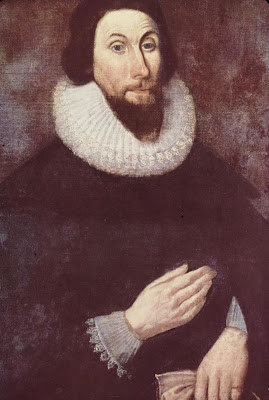 However, he is arguably most well known for a sermon he gave en route to America, entitled A Model of Christian Charity. In it, he famously uses the term "a city on a hill", taken from Jesus' Sermon on the Mount, to describe how the settling Puritans should be an exemplar to the rest of the world. But to me, the most important part of the sermon is how he treats the problem of inequality. He says that inequality in wealth as a part of society is not necessarily a bad thing, for the following paraphrased reasons:

Although I'm quite liberal, and therefore am hesitant to say that there shouldn't be economic equality, these are nonetheless amazing ideas. Rather than apply them to the rich and poor, here I will show several examples of how they apply to the inequalities and heterogeneity in the Church.

First, one of the main complaints about the Church from non-members is that women do not have the priesthood. It is the doctrinal issue which every non-misogynistic member must necessarily struggle with at some point in their lives, as it seems to be extremely unfair. I do not deign to understand the mysteries of God and the church's doctrines, but perhaps we can better understand this policy if we appeal to Winthrop's three reasons. Perhaps part of the reason women do not  have the priesthood is so that there can be multiple ways for people to follow God. Being a priesthood-holding father involves a different set of responsibilities than a non-priesthood-holding mother. This doesn't mean that one path is any better than the other. On the contrary, each is distinctly vital to the success of the family and the Church. But the really important bit is that this set of multiple paths to God is infinitely more fulfilling than if there were only one. Imagine if everyone had exactly the same set of responsibilities as everyone else: there would only be one way to do good, meaning that the piano of God's goodness would only be playing the same note over and over again. For the goodness of God is varied and diverse, and can be expressed in as many ways as can be imagined.

You can apply the same principles to the hierarchy of the Church. The prevailing spiritual ideal since the Enlightenment is that people should seek for spiritual truth on their own, without being bogged down by any organized religion. While the Church's doctrines agree with this sentiment to an extent, (we emphasize personal revelation a lot) it is unavoidably true that it is an institution, and not merely a group of people searching after spiritual truth. In this religion, a person simply can't worship merely as the Spirit prompts them. Members are supposed to go to meetings, fulfill callings and learn from lessons. It would seem, at least on the surface, much better if we could follow the promptings of our own hearts, and worship how we please. After all, isn't that a much more democratic and egalitarian way of doing things? John Winthrop would disagree. For if someone worships in the ways that the Church approves of, they fulfill another democratic ideal: interdependence. When a member goes to Sacrament Meeting, he or she can't be spiritually filled unless certain people (the deacons, the priests, the speakers, etc.) do their jobs. In so many words, it causes worshipers to need each other. These institutions of worship make sure that we aren't all cut off from each other, as they tie us together in an intricate net of responsibility and love.

In summary, we are infinitely better off being diverse and heterogeneous than we would be if we were uniform and homogeneous. It lets us enjoy the benefits of variety and the virtue of interdependence. It ultimately makes us a better people.
Posted by Christian Swenson at 10:58 PM No comments:

The Resurrection According to Rob Bell

In the past, I never really got Easter. It celebrates Christ's resurrection, but a big part of me has always asked "what does that have to do with me"? The atonement is understandably very important, but Easter celebrates something that happened three days later, that has nothing to do with Christ's all-encompassing sacrifice. Compared with this atonement and my own resurrection, the actual bodily arising of Christ seemed like just a mere historical event to me, without any impact on my life. Then, I saw this video:


It is by Rob Bell, who is, as far as Protestants go, my favorite preacher. He is renowned for putting a shiny new coat of paint on Christianity, to make it more accessible to a modern audience. But he is also very good at seeing to the heart of the Christian story and understanding the common themes that tie all the doctrines together, kind of like a less-eloquent C. S. Lewis.

This video is an example of that tendency. He takes the resurrection story, something that people usually see on the surface level, and analyzes its personal and metaphysical connotations. Essentially, he says that the resurrection of Christ means that nothing good will ever be lost or forgotten. While we may be tempted to think that all good things will ultimately come to an end, he says that "every fair act of business or trade" and "every kind word" matters. Resurrection means that though despair, worry, evil or death may seem to win the battle, it is only a temporary victory, and that hope, goodness and life will win the war. It means that the world is and ultimately will be a good place, where everything virtuous, lovely, of good report or praiseworthy lives and goes on.

What I took away from this is that when we celebrate Easter, we aren't necessarily celebrating Christ's resurrection alone. We are celebrating the inevitable resurrection of the entire world, including me, you and everything good that you've come to know.

I leave this message with you, hoping that we all will see that goodness and life will win the war, and that evil and death will lose. Happy Easter!
Posted by Christian Swenson at 1:03 PM No comments: