In contrast, however, suppose that I stand alone and quite independently face in my own heart the necessity of making a “yes” or “no” decision. Then, having answered “yes,” suppose I go forth and do what must be done. This “yes” will have released a strong force within me. When you thus place yourself in consciousness before a choice of alternatives, you allow strength to prevail over weakness simply from the manner in which your decision is made. This is important because in this way the control of the ego over the astral body is greatly strengthened. Try to carry out what I have just described and you will find it will do much to strengthen your will. - Rudolf Steiner, Overcoming Nervousness

Anything, including astrology, can be practiced at any level. One can go to an astrologer and get a negative-6,000 superstitious, fear-inducing reading or a negative-3,000 conformist reading, or a negative-1,500 predictive reading. The reason predictions are unpredictable is that they completely depend on the level on which they are staged. This is why Visionary Activist Principle Zero exhorts: "Believe nothing, entertain possibilities." Even if, because of some fluke, something we believe happens to be true, we are still giving our Saturn away. If we believe in the truth, but we have not earned it through our own work and observation, we are still limited by negative-6,000 superstitions or negative-3,000 group-mind social edicts. - Caroline Casey, Making the Gods Work For You

For it must needs be, that there is an opposition in all things. If not so, my firstborn in the wilderness, righteousness could not be brought to pass, neither wickedness, neither holiness nor misery, neither good nor bad. Wherefore, all things must needs be a compound in one; wherefore, if it should be one body it must needs remain as dead, having no life neither death, nor corruption nor incorruption, happiness nor misery, neither sense nor insensibility. - 2 Nephi 2:11

Let your communication be, Yea, yea; Nay, nay: for whatsoever is more than these cometh of evil. - Matthew 5:37

You write the line. Then, you touch it an compare it to the golden thread you are following. If it is not right, there is a sense of wrongness, an uncomfortable feeling. So, you change the line. You feel into the meanings that are held in the words. You feel how the words sit with each other. You listen to and feel the sound patterns of each individual word and the sentences they create together. And you make slight adjustments, shifting meaning by altering the container. Micro-molecular adjustments. The tiniest of shifts. Now, how does it feel? If you are closer to congruency, the sense of wrongness lessens, the discomfort's not so great. Yet, you can still tell something's not quite right. So, you adjust it again. Eventually, a sense of rightness occurs. A yes that comes from the deep self. Ah. This one is done. - Stephen Harrod Buhner, Ensouling Language: On the Art of Nonfiction and the Writer's Life

So I tend to get lost in my thoughts. A lot. In fact, this is such a problem that I often don't know what I think, don't know what I believe, don't even know who I am. I can think one thing, but as soon as I come across something that contradicts it, I jump ship and believe that. This happens on an hour-by-hour basis. I'm the anti-skeptic: I believe everything, but never at the same time. 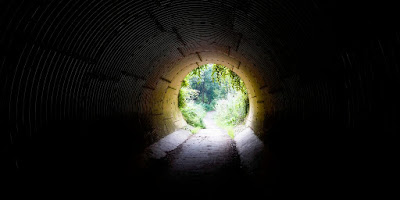 This is a problem, yeah? So much so that it's come to a crisis point a few times in the last month. But how can you solve a problem when you need a coherent plan, a thought, to solve a problem, and thoughts are the very problem you're trying to solve? There's no way out.

Except by grace, that is. When I was watching an episode of Swedenborg and Life last Monday, they brought up this quote from Swedenborg's huge interpretation of the first few books of the Bible, and it changed everything:

In addition it should be recognized that it is in accordance with the laws of order that no one should become convinced of the truth instantaneously, that is, should instantaneously be made so sure of the truth that he is left in no doubt at all about it. The reason for this is that when truth is impressed on a person in that kind of way, he becomes so fully convinced of it that it cannot be broadened in any way or qualified in any way. Truth like this is represented in the next life as that which is hard, not allowing good into itself to make it pliable. This goes to explain why in the next life as soon as some truth is presented through plain experience to good spirits, some opposing idea giving rise to doubt is presented. In this way they are led to think and ponder over whether it is indeed a truth, gather reasons in support of it, and so introduce that truth into their minds by the use of reason. This enables their spiritual vision in respect of that truth to be broadened, seeing even into the ideas that are opposed to it. They therefore see and perceive with their understanding every characteristic of the truth, and from this are able to let in the influences coming from heaven as the situation demands; for truths take varying forms as dictated by circumstances. - Emanuel Swedenborg, Arcana Coelestia 7298

In the spiritual world, angels and spirits never receive truth by itself. They receive truth, yes, but always together with a falsity that provokes doubt. The pro comes with a con; the yea comes with a nay. So you have a tension, an opposition, where you're no longer able to believe the truth uncritically and without examining it. You have to really look at it, figure out why the one is true and why the other is false.

And that's just what I needed. Lost in beliefs like I was, I was believing them wholesale, without examination.. Truth was truth was truth, I thought: manufactured, ready-made, to-go. But truth isn't truth; truth is just the detritus of good's movement into context. And, by placing a hypothetical truth against its opposite, I can probe for this goodness.

And the way one does this is through feelings. Feelings belong to goodness, and so when one compares the feeling one has of x belief with y belief that directly contradicts it, you have followed truth to its divine source. One will feel relatively brighter and one will feel relatively darker. And this is very, very useful.

For instance, when I run across a belief, I consider that the exact opposite of that belief might just as well be true. For instance, if I found a video by Teal Swan that says that "self-love is the shortcut to enlightenment," it might seem compelling, but in contrast with the contrasting belief, "self-abnegation is the shortcut to enlightenment, it's not so clear. Surprisingly,  "self-abnegation" feels brighter, even if "self-love" feels like it has a smidgin of vitality that the other one doesn't have. Here, the line between truth and falsity has been poorly drawn. Both beliefs have truth, but different aspects of truth shine out in each. So let's ask: what is the "vitality" in "self-love?" How can we assimilate that vitality into the "brighter" self-abnegation? And the answer comes: it is the quality of embodiment, of existing as the body you are, of living life in the physical world, and you don't need to adopt "self-love" to assimilate that vitality. So if I were to group the two good aspects of those beliefs together into a greater truth, it would look like this: "The shortcut to enlightenment is embodied self-abnegation." This feels good. Instead of loving myself against the world, here I am loving the world as it embodies itself in me. The opposite: "The shortcut to enlightenment is disembodied self-love" feels awful. So we've gained some objectivity, some clarity.

And a cool thing with this is that every "truth" is relatively false. Every embodiment of goodness could better embody that goodness. For if you take any truth, any belief, you can ask yourself: what modification to it would make it more true, would make it "brighter?" And you mess with it until you feel that brightness.

This works for any form of goodness. Even the "feeling signatures" of people. There's a girl in my class who I don't normally think about, but on the edge of sleep, I had the (loopy) thought that I could embody her feeling signature and then "one-up" it in this way, make the energy I emanated that much brighter in comparison. So I did, and I was immediately overcome by the strongest spiritual light I've ever felt in my body. To make the bright seem dark is to become really bright.

Moreover, this works not just for light vs. darkness but for any feeling signature. Let's say you're buying a present for a friend. You have two options of what to get her: a book or a rolling pin. Reading the "feeling signature" of both options, you aren't reading for "light vs. darkness" but for "feels like my friend vs. doesn't feel like my friend." One will feel more "like her" than the other one. Instead of feeling toward God in your gift-giving, you're feeling toward her.

You can also use this to "home in" on spiritual beings. Say you've isolated a feeling signature for a certain spiritual presence. By feeling out what feels more or less like that presence, you can learn a lot about it. What books feel "like" it? What movies? What quote? Before you know it, you've built a complicated gestalt that "traces" that spiritual being's countenance. You've spray-painted the Invisible Man.

Finally, if you're set on embodying a certain "feeling signature," a certain "vibration," at a given moment, you can use similar tools. If I want to embody a certain chakra's energies, for instance, I'll compare to feeling states to each other and ask myself which one is more desirable for that chakra. Then I'll embody the more desirable one and look for a feeling even further in that direction. There's no limit here.

In short, be smart with your feeling senses. We aren't living up to our privileges here.
Posted by Christian Swenson at 1:21 PM No comments: