How I Understand Energy Healing

If you would have told me three years ago that I’d be writing a post about energy healing, I would have laughed at you. And yet here I am. I’ve worked with two energy healers in that time, and both of them did me lots of good But I’d rather not talk about my experiences today. I’d rather talk about my theories about how energy work…well…works. 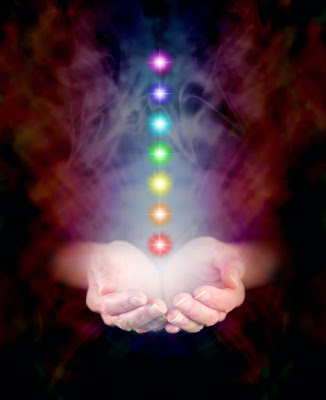 Energy healing is healing with energy. And though energy is everywhere, it's hard to understand. Energy doesn’t have a form in itself; it is the wind that “bloweth where it listeth,” of which you can “hearest the sound thereof, but canst not tell whence it cometh, and whither it goeth.” (John 3:8). It is what exists before “things” exist. It is the open field that manifests “things” in the first place. If things are currents in an ocean, energy is the water those currents are made of. Things are condensed energy; energy is an evaporated thing. Things are “nounitude;” energy is “verbitude.” Energy is the bright no-thing-ness that precedes and surrounds all thinghood.

Energy and “things” go together by nature. Each thing has a "vibration" of energy, and all energy wants to manifest itself in a thing. Your body and your personality both have an energy. So does your computer, your chair, and every book, video game, and movie. This isn’t because you or the video game “radiate” that energy. Far from it. Rather, things are “filters” or “prisms” that energy uses to become “many.” For energy is one in itself. It is God's light. But just like light, energy needs to “reflect” off of things in order to gain variety and manyness.  Things do that for energy; they are many ways by which it can discover itself anew.

This "thing-ification" of energy happens on many levels, both cosmic and microcosmic. For one, this is how the famous "Law of Attraction" works, which says that one's thoughts and feelings attract like circumstances in the physical world. I have found that this law works, but it's not obvious why it works. However, when you think a thought or focus your attention on something, energy is pouring from its formless, at-one state into the "mold" of that thought. From there, it radiates out into the world in that thought's "vibration." This law describes how these vibrations find each other in the world. They do this because energy is the ultimate reality. Like goes to like because like is like.

On a more mundane level, the energy-becoming-things process happens whenever we speak or write. What lets these words and sentences you're reading combine together to make sense?  The "sense" of this essay is their energy, at first undifferentiated, limit-less or end-less, but limited into a fixed form by the definitions of the words. As such, any word develops a specific vibration of energy when it gets paired with another word. It blocks some energies from flowing in and it specifically invites others. The reason Nietzsche feels different from C. S. Lewis is because their words act as so many "irrigation channels" that thing-ify energy in very different ways.

In truth, every thing is just a limited face of the limitless - it is a lens that reveals energy by displaying only some of those vibrations. In other words, things differentiate energy that would be undifferentiated without things. But there is always an "overlap" or "excess" of energy between things; there is a part of each thing's energy that applies to other things as well. For instance, in a conversation with you, we share a specific energetic vibration that lets us meet each other as fellow humans Or in a text, each word in a sentence shares a vibration with the next word. Otherwise, the collective vibration of the text as a whole could not emerge.

This energetic excess is what makes energy healing and energy work possible. For when an aspect of someone else's energy falls within the scope of my own "thinghood" or "nounitude," I can manipulate it. After all, I can change my own psychological and physiological well-being by directing energy through my thoughts -- the well-known placebo effect shows this. Why not in another? If I overlap energy with another person, my thoughts can affect their health just as well as it can affect mine. Moreover, this can affect things in the physical world, as with miracles.

So say someone goes to an energy healer and that healer uses a prayer to heal him. In this case, the energy healer is using her thoughts and her words to help energy descend from a divine place to the physical. Any physical actions or utterances are just aids to thoughts: energy irrigation channels that go down a bit further from heaven. If the person is open to it, he will be helped by the energy healer to the extent that the energy itself is willing to heal him. For energy has an will of its own. If it's not God's will, the energy healing will not work. Healers just facilitate the energetic descent; they don't cause it.

But energy work isn't something only specialists do. You do it every day. For instance, take a conversation around a table in a classroom. The teacher is about to make a joke, and before he reaches the punchline, his lips quiver a bit with a smile. Then when he says it, a few fractions of a second later, we all erupt in laughter. What the teacher was struggling to contain in his smile -- and what erupted in our laughter - is energy. But when he tells the joke, suddenly the energy in him gains an "excess" in us. We "get" the joke and the energy bursts free as a forceful exhalation. The words and movements the teacher made deliberately channeled the energy into his students.

Moreover, key to understanding the concept of energy work is the idea of "correspondences." A thing "corresponds" to a specific vibration of energy if it "emits" that vibration. As such, that vibration manifests itself physically in the thing that corresponds to it. But the key is that -- if energy knows itself by looking at its reflection in things in -- doing stuff with things does stuff with energy. Since things are the "face" of energy, changing things actually brings about a change in the energies involved. Of course, as I mentioned before, the energy can refuse to cooperate. But we can help it do what it would do blindly without us. This opens the door to all kinds of techniques for managing your emotional and physical well-being. If you need energy, for instance, drink orange juice. Orange juice might not be physically energizing (I don't know), but it does have an intense, "zingy," vibe to it. It is a blinding sunrise in liquid form, so you can channel those vibrations into your body by drinking it.

And notice that energy work requires attention. I wouldn't have laughed in the classroom example if I didn't "get" the joke, and I wouldn't feel energized by orange juice if I was doing it mindlessly. This is also why you need consent to do energy healing: if the person isn't expecting it, it won't work on a conscious level. Energy work only "works" with an open door of conscious attention. For example, one day I was sleeping in. I was almost asleep again, and in the half-asleep, "hypnagogic" state, I half-imagined, half-saw a demon of some kind sitting on me. Then, a Gregorian chant started playing on my Amazon Echo from a Spotify playlist, and the demon fled in fear. But crucially, the demon only left when I noticed that the song had changed to a Gregorian chant, when I consciously recognized its energy. If I didn't notice the song, the demon wouldn't have left. The energy healing wouldn't have taken place.

Most importantly, know that everything has its own kind of energy. The above manifests as the below. And as an old aphorism says about this idea: "with this knowledge alone you may work miracles."
Posted by Christian Swenson at 4:27 PM