Autism, Eye-Contact, and Batteries for Heaven

To this new-born Notself, the behavior, the appearance, the very thought of the self it had momentarily ceased to be, and of other selves, its one-time fellows, seemed not indeed distasteful (for distastefulness was not one of the categories in terms of which I was thinking), but enormously irrelevant. Compelled by the investigator to analyze and report on what I was doing (and how I longed to be left alone with Eternity in a flower, Infinity in four chair legs and the Absolute in the folds of a pair of flannel trousers!), I realized that I was deliberately avoiding the eyes of those who were with me in the room, deliberately refraining from being too much aware of them. One was my wife, the other a man I respected and greatly liked; but both belonged to the world from which, for the moment, mescalin had delivered me the world of selves, of time, of moral judgments and utilitarian considerations, the world (and it was this aspect of human life which I wished, above all else, to forget) of self-assertion, of cocksureness, of overvalued words and idolatrously worshiped notions. - Aldous Huxely, The Doors of Perception

On what does the perception of the ego of the other man really depend? The theorists of the present day say things that are quite extraordinary. They say: you see the form of the outward man, you hear his voice, and moreover you know that you look human yourself like the other man, and that you have within you a being who thinks and feels and wills, who is thus also a man of soul and spirit. So you conclude by analogy: as there is in me a thinking, feeling and willing being, so is there also in the other man. A conclusion is drawn by analogy from myself to the other. This conclusion by analogy is simply foolishness. The inter-relationship between the one man and the other contains something quite different. When you confront another man something like the following happens. You perceive a man for a short time; he makes an impression on you. This impression disturbs you inwardly; you feel that the man, who is really a similar being to yourself, makes an impression on you like an attack. The result is that you “defend” yourself in your inner being, that you oppose yourself to this attack, that you become inwardly aggressive towards him. This feeling abates and your aggression ceases; hence he can now make another impression upon you. Then your aggressive force has time to rise again, and again you have an aggressive feeling. Once more it abates and the other makes a fresh impression upon you and so on. That is the relationship which exists when one man meets another and perceives his ego: giving yourself up to the other human being — inwardly warding him off; giving yourself up again — warding him off; sympathy — antipathy; sympathy — antipathy. I am not now speaking of the feeling life, but of what takes place in perception when you confront a man. The soul vibrates: sympathy — antipathy; sympathy — antipathy: they vibrate too. (You can read this in the new edition of Philosophy of Freedom.) - Rudolf Steiner, The Study of Man, Lecture VIII

And the disciples came, and said unto him, Why speakest thou unto them in parables? He answered and said unto them, Because it is given unto you to know the mysteries of the kingdom of heaven, but to them it is not given. For whosoever hath, to him shall be given, and he shall have more abundance: but whosoever hath not, from him shall be taken away even that he hath. Therefore speak I to them in parables: because they seeing see not; and hearing they hear not, neither do they understand. And in them is fulfilled the prophecy of Esaias, which saith, By hearing ye shall hear, and shall not understand; and seeing ye shall see, and shall not perceive: For this people’s heart is waxed gross, and their ears are dull of hearing, and their eyes they have closed; lest at any time they should see with their eyes, and hear with their ears, and should understand with their heart, and should be converted, and I should heal them. But blessed are your eyes, for they see: and your ears, for they hear. - Matthew 13:10

People with autism typically have a hard time looking other people in the eye. When I was a kid, I was asked why I didn't make eye contact, and I said: "because it feels like my eyes are burning." This is not a bad response. Eyes are the window to the soul, and the soul at its heart is fire. The eyes are places where the fire comes out. Above every pair of eyes, there should be a sign that says: fire hazard. 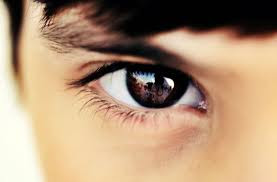 You can notice this too, even if you're neurotypical. Try staring at someone in the eye for thirty seconds, or even a minute, or two minutes, or five, and see if you can maintain your gaze without looking away. It'll get too intense. You'll feel naked, exposed, with a desire to wrest your soul away from the other's eyes. Anger flares up. You're done, you implicitly tell the other person. This happens because the soul is a holy of holies that one can only let another into by choice. This privacy is divinely protected; no one in the history of the world has ever been compelled from the inside. In this "holy of holies," you are alone and inviolate. It is not an accident that no one can use the word "I" to describe me but myself. And this is the way of things.

However, the autistic person's holy of holies, their "I," has not descended to the physical body. You will find that the autistic person does not identify with their body. I am not that, he says while looking in the mirror. As such, when the autistic person looks another person in the eye, he cannot remain disembodied. The eyes are the I-as-body. In the eyes, the I and the body are the same thing. And this terrifies Mr. Autistic.

You might think that the autistic person can never encounter the "I" of another person. This is only true if you mean "encounter" as it is normally done. True, the eyes are a place for the physical revelation of one I to another. But even in the physical sphere, there are other such places. There are, or at least can be, moments where a person becomes a living, dynamic process, every mannerism, word, and movement an expression of a single, eternal, spiritual reality. I have made this a skill. For instance, I have a friend whose every movement reflects a kind of "forceful smoothness." Her hands and walking style are fluid and continuous, but in each case full of an inner forcefulness perfectly adapted to that smoothness. She is like a river: moving smoothly but with a terrifying force. Likewise, I have another friend whose every movement reflects an "evasiveness": she doesn't sit; she perches, either sitting on her knees or with an abnormal, restless posture, as if she were ready at any moment to "fight or flight." She speaks quickly; she does not flow but darts. In both of these women, what I saw was their "I" reflected in the physical world (namely, through their whole body) but I didn't need to look them in the eyes to see it.And since I am autistic, this is very encouraging.

The autistic person should also already be quite talented at connecting with people "sideways." What does this mean? It means "dwelling with" the spiritual presence of another being, not connecting with them physically but spirit-to-spirit, so to speak. In her book Autism and Sensing: The Unlost Instinct, autistic author Donna Williams calls this process "sensing." "Sensing" is what happens when you have neither an awareness of self nor of other, but you instead "feel the object as the object, from within, without interpretation or mind, using the body not as a tool of sensory exploration or body as self, but as a tool of resonance." She continues by saying that "one does not need to check, judge, analyse, prioritise. The experience simply happens, not because the mind wants it or thinks about it, but because, quite irrelevant of the dictates o the mind, it is willed." Autistic "sensing" is the "merging" of "I's," what Rudolf Steiner would call "Intuition." It is to dwell as oneself in the being of another person, for me to be Jack as Jack, for me to be Jill as Jill. And this is indeed a high stage of clairvoyance.

The autistic person dwells with their "I" in this nonphysical world of spirit. They do not meet you in the physical world, which is why they seem absent, with dull or vacant eyes. Instead, they are operating it from above, as if they were conscious not of the video game but of the fingers operating the joystick.  But the autistic person is really a time bomb. There is a lot of light in that "I," and guess what it's doing while it's not in the body? Not getting tainted by the darkness of the world. In truth, autistic people are watertight reservoirs of light. They are arks. Why are they rigid and intractable? Why don't they look you in the eye? Because their job is to keep the light inside them safe from anything and everything. The autistic person is afraid of the physical world because their God-given task is to protect light from the darkness that is so prevalent in it. An ark is only as good as its sealing.

However, autistic people can use this light. And, in fact, they do. The autistic person is a kind of energy for higher worlds. As I pointed out in my post How You Feed Angels, the good beings on the other side rely on the good actions we do for sustenance. And autistic people give them a shortcut for this. No matter how depraved the world becomes, autistic people are so innocently clueless that the higher worlds can rely on them for food come hell or high water. They are the what Swedenborg would call "the remnant," a secret treasure goodness and truth that keeps a person or a church from completely dying. If all the autistic people in the world were to die tomorrow, the whole human race would inexplicably perish just as surely as a non-functional heart is a death sentence for the whole body.

Why don't they look you in the eye? They're protecting heaven. Simple as that.
Posted by Christian Swenson at 7:18 PM