As to Michael in particular, it is believed from the sense of the letter that he is one of the archangels; but there is no archangel in the heavens. There are, indeed, higher and lower angels, also wiser and less wise; and in the societies of angels there are governors who are set over the rest; but yet there are no archangels in obedience to whom others are held by any authority. There is no such government in the heavens, for no one there acknowledges in heart anyone above himself except the Lord only; this is what is meant by the Lord's words in Matthew: Be not ye called teacher, for one is your Teacher, Christ, but all ye are brethren. And call no man your father on earth, for one is your Father, who is in the heavens. Neither be ye called masters, for one is your Master, Christ. He that is greatest among you shall be your minister (Matt. 23:8-11). But by those angels that are mentioned in the Word, as "Michael" and "Raphael," administrations and functions are meant, and in general, limited and certain departments of the administration and function of all the angels; so here "Michael" means that department of angelic function that has been referred to above, namely, the defense of that part of the doctrine from the Word that teaches that the Lord's Human is Divine, and that man must live a life of love to the Lord and of charity towards the neighbor that he may receive salvation from the Lord, consequently that department of function is meant that is for fighting against those who separate the Divine from the Human of the Lord, and who separate faith from the life of love and charity, and who even profess charity with the lips but not in the life. [3] Moreover, in the Word "angels" do not mean angels in the spiritual sense, but Divine truths from the Lord (see above, n. 130, 302), for the reason that angels are not angels from what is their own [proprium], but from the reception of Divine truth from the Lord. It is the same in respect to archangels, who signify that Divine truth, as has been said above. Angels, moreover, in the heavens do not have such names as men on earth have, but they have names expressive of their functions, and in general, to every angel a name is given according to his quality; this is why "name" signifies in the Word the quality of a thing and state. The name Michael means, from its derivation in the Hebrew, "who is like God;" therefore Michael signifies the Lord in relation to that Divine truth that the Lord is God even as to the Human, and that man must live from Him, that is, in love to Him from Him, and in love towards the neighbor. Michael is mentioned also in Daniel 10:13, 21; 12:1, and signifies there like as here the genuine truth from the Word, which will be for those who are of the church to be established by the Lord; for "Michael" means those who will favor the doctrine of the New Jerusalem, the two essentials of which doctrine are, that the Human of the Lord is Divine, and that there must be a life of love and charity. - Emanuel Swedenborg, Apocalypse Explained 735 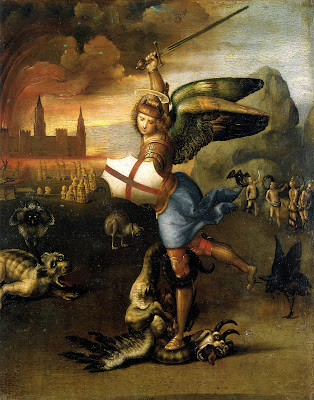 Verse 16. And the earth helped the woman; and the earth opened her mouth, and swallowed up the river which the dragon cast out of her mouth, signifies that reasonings from falsities in abundance, which the dragonists produce, fall to nothing before the spiritual truths rationally understood, which the Michaels, of whom the New Church consists, bring forward. By "the earth," which helped the woman, is signified the church as to doctrine (n. 285); and because the reasonings from falsities, which the dragonists produce, are treated of, they are truths from the Word, by which "the earth," that is, the church, "helps the woman;" by "opening her mouth," is signified to adduce those truths; by "the river which the dragon cast out of his mouth," are signified reasonings from falsities in abundance (n. 563); by "swallowing up" is signified to make them fall to nothing; by the Michaels are meant the men of the New Church; by "Michael," the wise therein; and by "his angels," the rest. [2] Since in the New Church this dogma is rejected, that the understanding is to be held captive under obedience to faith, and in the place of it, this is received, that the truth of the church should be seen, in order that it may be believed (n. 224); and since truth cannot be seen otherwise than rationally, therefore, it is said, from truths rationally understood. How can any man be led by the Lord, and conjoined with heaven, who shuts up his understanding in such things as relate to salvation and eternal life? Is it not the understanding which will be enlightened and taught? And what is the understanding closed by religion, but thick darkness, and such thick darkness as rejects from itself the illuminating light? Again, who can acknowledge any truth and retain it, unless he sees it? What is truth not seen but a voice not understood, which, with sensual corporeal men, is usually retained in the memory, but cannot be with the wise? The wise, indeed, cast out empty or unmeaning words from the memory, that is, such as have not entered from the understanding; as that one God consists of three Persons, also that the Lord, born from eternity, is not one and the same with the Lord born in time, that is, that one Lord is God and not the other; and again, that the life of charity, which consists in good works, and likewise in repentance from evil works, effects nothing to salvation; a wise man does not understand such things; therefore from his rationality he says, religion does not effect anything. Is not religion to shun evil and do good? Must not the doctrine of the church teach this, as also what a man should believe, that he may do the good works of religion from God? - Emanuel Swedenborg, Apocalypse Revealed 564