Until then, we walk by whatever faith we have, seeking always to increase our faith. Sometimes this is not an easy quest. Those who are impatient, uncommitted, or careless may find faith to be elusive. Those who are easily discouraged or distracted may hardly experience it. Faith comes to the humble, the diligent, the enduring. - Dieter F. Uchtdorf, Fourth Floor, Last Door, October 2016 General Conference

You cannot have faith unless you have the ability to focus. There. I said it. It seems monumentally unfair, not least to those with ADHD and those like me on the autism spectrum and yet, alas, it is true. To the degree you cannot block out distractions and focus on what you intend, you will be unable to have faith. Faith is a forceful looking-toward, a movement that says: "I'm not looking at this new thing; I'm persisting in what I chose to have faith in." If you are "easily discouraged or distracted," as in the Uchtdorf quote above, you will not have faith. You will get lost in the shiny things of this world and not taste the fruits of the Spirit. 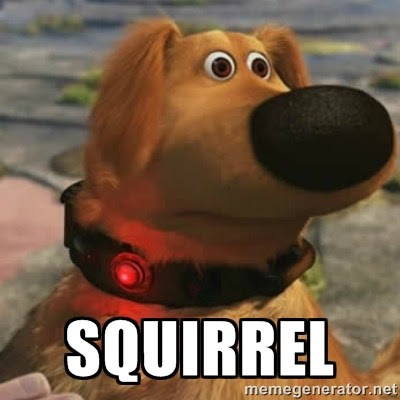 I say this not to be cynical or harsh but to be realistic. I was never told this. I fell into sinful behaviors, again and again, never realizing that I simply did not have the spiritual muscles that would repulse them. I was and am high-functioning autistic, and I have deficits in executive function, defined as an ability to choose and pursue focus. This is a weakness of mine, one that, I'm sure, was intended to humble me.

From an Anthroposophical (Rudolf Steiner) perspective, what we're dealing with is the inability of the "I" to regulate the "etheric body," that which connects the inner and outer, and the physical body itself. If you cannot carry through your intention (from the I) out into the world, the etheric and physical bodies will be swamped by forces that t supposed to be protected from. Describing the similar state an initiate must pass through by withdrawing his higher members from his lower ones, Steiner explains the dangers of being too open to the external world:

It is evident from the foregoing that, through work in a higher world, the soul must withdraw from the body some of its activity ordinarily bestowed upon it with such care. It leaves the body to a certain extent self-dependent, and the body needs a substitute for what the soul had formerly done for it. If it does not obtain such a substitute, it comes in danger of mischief from hurtful forces, for one must in this regard be clear that man is continually subject to the influences of his surroundings. ... There are beings who do not condense into the mineral condition, but who are none the less present and exert their influence upon man ... Man is thus exposed to influences from kingdoms of nature that in a sense must be called invisible. Now, when the soul works upon the body, a considerable part of its activity consists in regulating the influences of the elemental kingdoms in such a way that they are beneficial to man. — The instant the soul withdraws part of its activity from the body, injurious powers from the elemental kingdoms may get hold of it. Herein lies a danger of higher development. Therefore care must be taken that, as soon as the soul is withdrawn from the body, the latter is in itself accessible only to good influences from the elemental world. If this be disregarded, the ordinary man deteriorates, to a certain extent, physically and also morally, in spite of having gained access to higher worlds. While the soul dwells in the higher regions, pernicious forces insinuate themselves into the dense physical body and the etheric body. This is the reason why certain bad qualities, which before the higher development had been held in check by the regulating power of the soul, may now come to the fore for want of caution. Men formerly of good moral nature may, under such circumstances, when they enter higher worlds, reveal all kinds of low inclinations, increased selfishness, untruthfulness, vindictiveness, wrath, and so forth.

For the danger of a lack of focus is that the higher members (the spirit) cannot nourish and sustain the lower members (the body), and so the body is infiltrated by a whole host of frankly demonic forces that the higher members were supposed to immunize it against. What does this look like practically? Frankly, it means being buried beneath the world. Never being able to rise above it. It's the state of being lost in a crowded subway station or forever drowning like Tantalus in the River Styx. Indeed, this state is the Underworld (under-world).

Why is this the case? Why are some people born with an inability to focus? While this has surely always been a problem for some, it seems to have become pandemic recently. And I would suggest that it has everything to do with something else Steiner wrote (The Work of the Angels in Man's Astral Body). He explains that angels are at work in our astral body (the body of consciousness) and that if they remained consciously unrecognized there by the year 2000, they would descend into the etheric body (the body of life; the connector between soul and body) and wreak collateral havoc. The fire of higher worlds would descend prematurely and unconsciously into our lower members and make us explode with all our garbage. I suspect that we did not recognize the work of angels in our astral body before the year 2000 and that the angels are indeed working unconsciously in our etheric bodies while we sleep. We are exploding with heavenly fire from beneath, with all our crap. We are a supervolcano that is asleep even while it erupts.

But! What do about this? Luckily, Steiner is full of a wealth of information on how to counteract this situation. First, I'd suggest looking at my post Why Faith is Important that has a long quote from Rudolf Steiner that prescribes exactly how to counteract the situation I quoted above. To make a long story short, it means learning how to think and say and do exactly what you intend. Don't let distractions get in. But do read it.

More practically, Steiner gives many tools for building the etheric body and the I. The most powerful one is surprising: picture a series of events backward. Try doing this in bed at night: picture your day from end to beginning in reverse, falling out of bed, turning on the light, sucking up toothpaste, stepping dry out of the shower, going reverse all the way to school, etc. Rewind. Doing this forces you to pay attention and use force in your thinking where before you would just let the sequence of time provide the force. This force is the "focus" I mentioned above; this exercise builds the spiritual muscles that you need for faith. As such, this exercise is worth its weight in gold.

And there are others: try to purposefully change your handwriting style, which forces you to pay attention to (focus on) the task at hand; take a vivid snapshot in your head of where you leave a given object like your keys or your phone in order to find it later; be aware of how you look  from the outside when you walk, talk, sit down, etc.; refrain from doing things that you'd like to do but don't have to do, just for the sake of refraining; and many others. Specifically, check out Steiner's famous lecture Overcoming Nervousness, which is entirely about this problem. Also check out the book Strengthening the Will: The Review Exercises, a compilation of all of Steiner's remarks about this subject.

You can do this. You were meant to. You deserve to stand on your own two feet.
Posted by Christian Swenson at 12:29 AM