I will honour Christmas in my heart, and try to keep it all the year. I will live in the Past, the Present, and the Future. The Spirits of all Three shall strive within me. I will not shut out the lessons that they teach! - Charles Dickens, A Christmas Carol

Like all of us, the artist suffers from the spirit of the age. The creative artist, like a shaman and magician, however, is able to be in-formed by and constructively channel, transmute, and out-picture the seemingly obscuring daemonic energies of wetiko in a symbolic form that takes away wetiko’s spell-binding power over themselves, while at the same time helping to nonlocally dispel the collective enchantment pervading the entire field of consciousness. Discovering novel, creative, and ever-evolving articulations of language to express experience is a “spell-casting” activity, in that it serves to dispel the veil of illusion which limited forms of language can cast which seemingly obstructs us from the true richness of our own experience. Creatively expressing what is moving us is the very act which liberates us from the compulsion of having to unconsciously re-create these energies (self)-destructively in a way that continually retraumatizes both ourselves and the world around us. In the figure of the artist, the creative spirit realizes itself through us, while at the same time we, as artists, reciprocally realize ourselves through it  - Paul Levy, Dispelling Wetiko

My first meeting with him entirely changed my opinion of him and of what I might expect from him. I remember this meeting very well. We arrived at a small café in a noisy though not central street. I saw a man of an oriental type, no longer young, with a black mustache and piercing eyes, who astonished me first of all because he seemed to be disguised and completely out of keeping with the place and its atmosphere. I was still full of impressions of the East. And this man with the face of an Indian raja or an Arab sheik whom I at once seemed to see in a white burnoose or a gilded turban, seated here in this little cafe, where small dealers and commission agents met together, in a black overcoat with a velvet collar and a black bowler hat, produced the strange, unexpected, and almost alarming impression of a man poorly disguised, the sight of whom embarrasses you because you see he is not what he pretends to be and yet you have to speak and behave as though you did not see it. He spoke Russian incorrectly with a strong Caucasian accent; and this accent, with which we are accustomed to associate anything apart from philosophical ideas, strengthened still further the strangeness and the unexpectedness of this impression. .... G.'s [Gurdjieff's] words, in addition to their ordinary meaning, undoubtedly contained another, altogether different, meaning. I had already begun to realize that, in order to arrive at this hidden meaning in G.'s words, one had to begin with their usual and simple meaning. G.'s words were always significant in their ordinary sense, although this was not the whole of their significance. The wider or deeper significance remained hidden for a long time. - P. D. Ouspensky, In Search of the Miraculous

The new film The Man Who Invented Christmas is a psychological masterpiece. An origin story for A Christmas Carol, it depicts Charles Dickens writing that book as a way to understand and come to terms with his painful past. Dickens, whose father went to debtor's prison and who had to black shoes in a workhouse as a very young child, was traumatized by poverty. He gave compulsively to the poor, wrote socially conscious novels about the plight of the lower classes, and yet couldn't help getting himself in debt. He was bound to scarcity, as it were: it repeats itself in him. He is fettered by the chains he (unknowingly) forged in life. By writing A Christmas Carol, he meets his pain, talks to it, and integrates it. 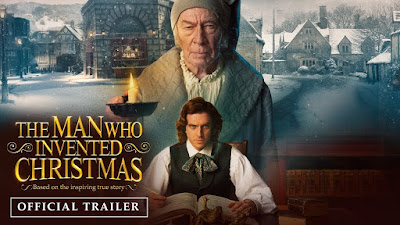 In the film, Scrooge is the face of that pain. He is Dickens' shadow side, the aspect of him he does not acknowledge and which acts out in unexpected cruelty. He is scarcity; he is fear; he is the terror of not having enough. Of course, this "squeezing, wrenching, grasping, scraping, clutching, covetous old sinner" is ridiculously larger than life, a bit absurd. But for good reason! Like all cliches, he covers up the writer's baggage. And baggage works itself out there despite the cliche, for The Man Who Invented Christmas discerns the hidden truth that Scrooge, as Dickens' shadow side, carries Dickens' wholeness. Scrooge is secretly a healer. In the film, Scrooge (played by Christopher Plummer) has a twinkle in his eye. He reminds me of a Zen master, of Rumi, of the profound spiritual rascal G. I. Gurdjieff, but most of all my therapist when he impersonated my negative voices. This Scrooge is Dickens' wholeness impersonating his pain with a thinly veiled theatricality, fanning the flames at just the right intensity so Dickens can realize that pain without getting too hurt. And though it can seem cruel at times, it is one of the best therapeutic techniques I know.

However, this cathartic integration of Dickens' shadow side happens through writing, and The Man Who Invented Christmas says what I said in my last post: that writing, as the shadow side of our collective conscious attitude, carries that attitude's wholeness. If we want to heal, there is no better way than to start writing! By writing, what lives itself out in me unconsciously can shunt itself out and present itself anew to me through the medium of pen and paper. The page is an external hard drive, another brain, a way by which pain can live itself out away from my habitual restrictions. Works which heal in this way carry and perpetuate that healing in and through whoever reads them. And so it is no accident that A Christmas Carol is so popular, that it's basically the reason we still celebrate Christmas, that my folks' theater puts it on every year to sold-out audiences. Dickens was a wounded healer; the book is the medicine he distilled from that wound's poison. And we can tell.

More specifically, A Christmas Carol is a way we can heal our past baggage, and that's because (among other things) it has a lot to do with the past. For the book's ghosts are spirits of time, time-spirits, "Zeitgeist" in German: Past, Present, and Future. There is a mystery contained here that no one has seen. For I suspect that the book is so healing because it struggles to this conclusion: we will only heal--as people, as a species, as a world--when past and future stop fighting each other. For all pain is an enmity of past and future.

When we experience great pain and refuse to look at it, a part of our personality is trapped at the moment when that pain happened. Through trauma, the past has been hermetically preserved, and we look forward to our goals and projects in life with that part of ourselves uninvolved. The life in the past and the numb corpse of the future have been severed from each other. There is no memory; time unravels.

This book, then, is a great act of memory. Scrooge remembers being a boy, remembers Bob Cratchit, remembers his guilt. And as the film's postscript says, the skyrocketing acts of charity that followed its publication are also deeds of memory.  Through memory, pain knows itself in the present and the present is no longer cut off from the life trapped in pain. Memory is the mark of the world on the body, the mark of the other on the self. Without it, we are as solitary as an oyster. With it, our shut-up hearts open freely.

Whenever we read or A Christmas Carol, that reintegration, this re-embodiment gets played out like a great collective sacrament. In it, something new is born in us from a long conflict. The child, who would otherwise die, does not die. We no longer squeeze or wrench; we open our palms, tenderly, vulnerably. And the life in our hearts comes out onto the world stage. It is Christmas.
Posted by Christian Swenson at 6:33 PM