The Blind Womb of Being: The Existential and Transpersonal Themes in George Frederic Watts' "The All Pervading"

Another paper I wrote in my Victorian class!:

George Frederic Watts was British painter from the Victorian era who anticipated the Symbolist movement. In his paintings, he strove to represent intimations of realities beyond the realm of conscious thought and yet which pervade the human experience of life. “Hope” is one such painting; “Love and Life” is another. These paintings, abstract and yet viscerally concrete, are the embodiment of what is too diffuse to otherwise have a visible form. What does hope look like? Perhaps a blindfolded woman playing a lyre. These painted embodiments, however, do not come from deliberate, conscious ratiocination. They are dreamed up; they realize themselves as they are painted. In this essay, I will discuss Watts’ painting “The All Pervading” and the deep existential and transpersonal themes at work in it. 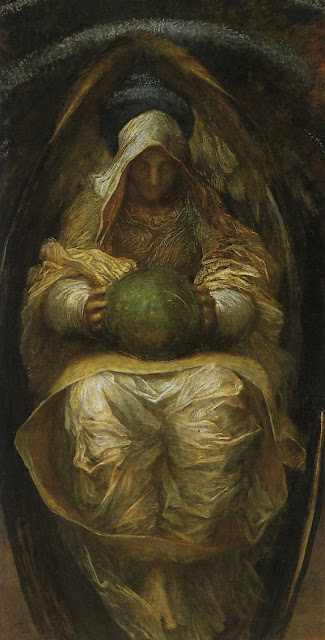 In a biography she wrote about her late husband, Mary Watts described the experience that the painter had which led to his work on “The All Pervading”:

In the centre of his studio, which was the drawing-room of the house, there hung a huge glittering chandelier. To the unimaginative its glass drops and beads appeared to be the last thing in the world to suggest a picture. It was French according to the taste of thirty or forty years before, and nothing more. But he had found there some suggestion of the beautiful, and from it grew the solemn and mystic figure holding the universe in hands that encircle the sphere; the picture he named “The All-pervading.” (Watts 104-105)


The painter experienced something in the seemingly bare glitterings of a chandelier that was more than texture, more than light. And this “something” could only realize itself obliquely in those obscure ephemera. Captured, recorded, remembered, they realize themselves fully not through a casual glance but instead through an eye that gazes, that, as though hypnotically, gives that experience enough space within the artist’s mind to not merely stay the same, much less fade, but grow.

The All-Pervading pervades all. She stands outside the whole, in the periphery of the circle, the globe, circling it, caressing it, enrapturing it and enraptured by it. Her eyes do not gaze; they are closed or…perhaps…they have never seen at all. Perhaps, pervading all, this “solemn and mystic figure” has no need to take things into her being through the senses, since, after all, she is one with all of them. She holds being in her bosom. For her, all is touch. Hers is the primal copulation that precedes sight: the latent intelligence of being, the ecstasy of womb, the anonymous infinity that precedes birth, follows death, and lies beyond the edge of our visual field.

This is what Carl Jung experienced as a dream after a heart attack. In his Memories, Dreams, Reflections, he writes of how “on the floor in front of [an] altar, facing me, sat a yogi—in lotus posture, in deep meditation. When I looked at him more closely, I realized that he had my face. I started in profound fright, and awoke with the thought: ‘Aha, so he is the one who is meditating me. He has the dream, and I am it.’ I knew that when he awakened, I would no longer be.” (Jung 323) This is Jung’s “Self” archetype, the reality that lives itself as an individual ego, forgetting itself but thereby perhaps realizing itself. It contracts itself into a focused whole, a concentration, centers itself from the periphery, realizing the circle it is. The circular nature of the All Pervading would not be lost on him. The painting, the gestating woman it depicts, and the universe she gestates: it is all a mandala.

And in the experience of the chandelier that was nevertheless more than a chandelier, we have a glimpse of how the All-Pervading works herself into the limited awareness of sight. For “she” can only come in a glimpse, a dimming of consciousness, a sight that is no longer sight but something deeper, more primeval, less mortal. Sight here erases itself, cancels itself out, makes itself null, renders itself transparent. Something shines through, so to speak, a light that is not light, a light that makes all light darkness, a light that is darkness, nothing more than a glimmer. The “light of common day” continues as it always does—sunlight, candlelight, the moon and stars—but from the experience of that uncommon light there grows something alien and yet hauntingly familiar. Could it be? Could that glimpse, that momentary ecstasy, be the real world? Could my life be nothing more than the peripheral echo of that glimmer, that kaleidoscopic, ephemeral surfacing of light? It cannot be. It is too terrible, the loss it suggests too unbearable. And yet…

The All-Pervading is the primeval, erotic darkness of light. The globe she holds is, of course, the chandelier itself, the room, the painter, the canvas, the world: what extends itself spatially from the reference point called “here and now.” But outside that sphere, outside what can be mapped, where no light shines and yet sleeping within light as its inner vitality, there stands a being: asleep, vaguely maternal, angelic. We are gestated in the lap of this great being. We are a dream in her archetypal slumber. And because her being is itself sleep, is the primeval osmosis of touch itself, she is never seen with eyes or heard with ears. Except, of course, when a painter drifts into a trance himself and, with an eye asleep within his eyes, traces the contours of a great draped mother and, waking up, astonishes himself at the haunting and terrible mystery he has thus remembered.

The All-Pervading carries the peace of something we all leave behind in order to reflect, think, or even exist. For she is the peace beyond and within all existence, surrounding it, sleeping with it, idly fondling its contours. She is the life of what we forget, the life of forgetfulness. But it does not trouble her. For she never changes: all is touch; all is communion; all is love.
Posted by Christian Swenson at 4:20 PM