Response: Why People Leave the Church and Never Come Back (With Weeping Angels)

So this is a fantastic article that you should read. It's devotional, upbuilding, and real. I had two sets of thoughts while reading it:

Why People Leave the Church and Never Come Back

First, I realized how perniciously focused we are as a church culture on how much either I or other people measure up to certain expectations, be they commandments or mere norms, and how much we equate both a) commandments and norms, and b) the act of measuring up to these expectations with the act of obtaining worth. This is wrong. Worth is not a function of following norms or even commandments. Worth is a way I conceive of myself that, if I adopt this conception as an assumption or an act of faith, will both justify that assumption insofar as I believe and act on it and lead me to follow commandments as an expression of love for He who loves me and whose love is presupposed and believed in with that assumption.

Second, I realized that I haven't experienced judgment from church culture for a long time, even though I used to, and even though I'm probably more unorthodox now than I was then. I wondered why this was, especially considering that others can and do experience said judgment. I came to the provisional conclusion that it's because I stopped considering *myself* as unorthodox a few years back. It makes me wonder how much of judgment from others is a function of self-judgment (as well as vice versa, which is also very true), since perhaps insofar as I treat myself as someone who belongs, the others in my group will treat me in the same way I treat myself. Judgment or the lack thereof, then, are maybe acts of of reciprocal "role-casting," where the role I/the group casts me in is the same role the group/I cast me in. This is a problem. How do you break the cycle? I'm not sure how I did it, and I don't know if it would be as easy for someone who, say, struggles with same-sex attraction. But here are some thoughts anyway:

To stop casting myself or others in a problematic way that reinforces itself cyclically over time, I'd need to realize that this cycle is, first and foremost, a way of organizing my being-in-the-world that gives certain elements of my being-in-the-world (me, you, the church, the bishop, that guy, that girl, God) certain significances. This is always true, and (crucially) it is objectively true across persons. I am "the one who is judged" both to me and to others. Since our motor, affective models of the world and our collective situation in it cohere together, reciprocally co-implicate, and depend on each other, affective "roles" for certain people or types of people will reinforce themselves across time. This is true politically: a liberal person is someone who is cast both by themselves and by conservatives as "the opponent of conservatives." That, funnily enough, is something that almost everyone agrees on across the spectrum, in this era of partisan politics: "That conservatives are the opponents of liberals and liberals are the opponents of conservatives." But I digress.

To heal from this state where these co-implicating significances rule ( like "I am an unorthodox person," say), we'd need to introduce not merely a new meaning but a new meaning-generative complex. That is, I not only need to reconceptualize myself (since this would use and operate within the same mode of conceptualizing; I'd just, maybe take a different role in the same generative system; I'd become someone orthodox, but then someone else would take the unorthodox role and I'd be the aggressor instead of the victim) but instead change my *method* of conceptualizing *and* reconceptutalizing both myself and the world. I'd need to *signify* in a different way.

This can happen in innocuous ways, like with me above. For instance, a mode of representing both me and the world can expire, and a new one can take its place. You can never will this, obviously (since the will would come from the old representative place), but it can happen incidentally. But you can pray, and not just to God. If you ask for a representative state to represent itself in you, it often will, without you knowing. These representative modes of beings are archetypes, gods, if you will, and can be talked to and acted from. And you can "fake it till you make it." In the same way that deliberate rhythmic breathing in bed will turn into sleep's deep breathing on its own, and in the same way that the Dionysian initiate would *become* Dionysus by mimicking him in the mystery center, if you pretend that you're orthodox, you eventually will be.

But, interestingly, *sin* is a generative, representative state like this. We are all born into this state. We can't get rid of it. But Christ can. Christ is the factor in me that not only gives me something to know or learn (i.e. a different way of seeing myself) but more importantly gives me a different way of knowing and learning. Christ does not operate within our modes of representation; he doesn't work with these reciprocal co-implications; he breaks them open. He frees us from the prison not only of our thoughts but of our systems for generating thoughts.

And how does this work? Not by our works (those works represent themselves, of course, from a mode of "working" that is itself sinful, is itself what Christ is here to save us from), and not by a mere verbal declaration of faith (which also comes from a sinful place). Instead, Christ's redemption and liberation comes by magnifying the sinful mode of working and speaking in us until, in a moment of despair that we can't plan and can't facilitate, we abandon the representative model at the lowest level of representation, of what precedes representations, words, or works themselves, on the level of *representing*. Why? Because it consummates itself and you don't go down with the ship.

Two parables to illustrate this point: first, if you do zazen in full-lotus pose with your ankles above your knees, and if (like me) you're not too flexible, it will hurt. But then you'll realize that the reason it hurts is because the regular muscle tension in your legs (i.e. what *situates* and *represents* your movements) has been exaggerated to the point of pain. So you relax them. And then you realize...wait...I *can* relax them. I can do that? Oh...*that's* what peace feels like. I had forgotten.


Second, the episode "Blink" of Doctor Who's third season ends with an almost insoluble problem: Sally and Larry (I looked up their names!) are trapped by weeping angels in the Tardis, but, oh no!, the Tardis is disappearing and the angels are surrounding them. They will die. It is certain. How could it not be? But in the Doctor's genius, the angels, who turn themselves to stone if ever looked at, are *looking at each other*. In the moment of despair, in the moment of hopelessness, is when evil destroys itself in its own crossfire (this type of escape is also, btw, a crucial plot point in Doctor Who's fiftieth anniversary, which was written by the same guy). 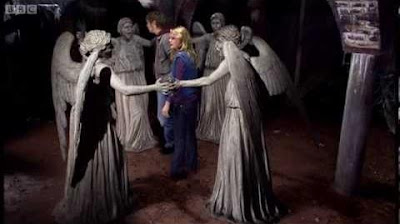 So, in short, evil needs to be let out and allowed to self-destruct. The painful, sinful representative mode must exaggerate itself to the degree where the mode *as such* becomes apparent and not just what that mode represents. But you can't expedite the process. The only thing you can do is pray to God to do so, to pray to be surprised by the grace of despair and, thereby, by the freedom that flees despair's shipwreck, the Ark that survives the Flood.

But I lie. You *can* expedite the process. But not directly. Instead, you must give God something to work with. Every time you read scripture, you give the aspect of you that can and will liberate itself in this crisis tools to a) liberate itself, and b) to allow evil to condemn itself (a and b are the same). Good, or God, does not condemn evil; He and it disclose evil as evil and let evil destroy and condemn itself. God loves the souls in Hell (as we all are, to an extent) too much to do anything but expel it slowly.
Posted by Christian Swenson at 10:41 PM