If you read my blog carefully, you’ll know that I’ve been doing “active imagination” for almost four years now. Active imagination is a technique invented by Carl Jung where a person “consciously daydreams” and somehow records it. It’s been so helpful to me, but until recently, I’ve kept it private.

I believe the characters I encounter in active imagination are very real. They’re not made up: they’re real propensities toward existence; I just supply the details that clothe those propensities. I guess you could call them forces; I give them things like memories and concrete associations that they act on. As such, I try to respect their wishes and treat them like any other intelligent being.

Today, I did an active imagination with a big cat from one of my dreams. It was actually a nightmare, where Big Cat (what I’ll call him) chased me and apparently wanted to keep me for his own. It was terrifying. I approached him in this active imagination and things went differently than expected. You’ll see. Anyway, I asked him if I could show this to others, and he agreed, on one condition: that the world knows he is not a monster and isn’t evil. That is what you must realize while reading this. 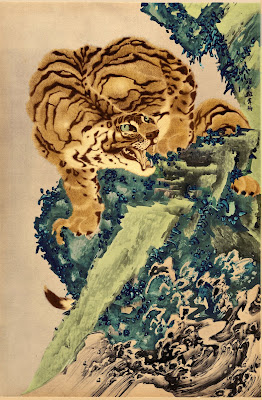 So here it is:

There is a big cat on the borders of the imagination. It stalks and prowls, only to pounce at the moment when weakness is there. It is not fearful; it is dense, powerful, overwhelmingly powerful. It wants to kill everything that lies in its path, not to destroy it but to it up. It wants to burn away the fluff, kill the extra fat. It wants to trim me with its teeth.

It chases me. Yes, it me! It’s just behind me! I run, run, RUN until it’s there… it’s THERE and I can’t stop, I can’t breathe, I can’t think and it’s there and it’s monstrous and powerful and scary. There it stands, breathing, pulsing, densely powerful, forcefully pushing me to the ground. It stares me in the eyes. And then it bites me on the head

But not hard. It’s a play bite. Suddenly, it me into the crook of its front leg and licks up my face and into my hair. Then it sets me down with its mighty paws and tells me to stand up straight. Yes, STRAIGHT! Be still, be powerful, be relaxed. Let the energy of the cat run through you. Yes! Be the one you were meant to be! Let the force of the panther and the jaguar and the ocelot fly through your veins and come out through your fingertips as if they were reservoirs of fire. I feel the fire in me and I lose my balance. I sway and can’t keep myself. Big Cat pushes me back up with a gentle, forceful nudge. Can I do it?

Yes, you can! Be straight. It’s your own power you’re reclaiming. Don’t be . Let it out. Let it SWIM!

I do it. I am still. Firm. Powerful. I am the rudder of the wind. I turn the tree roots and let them sink the flesh of the earth. I bring it up and up and up to the sky and let it OUT! Let it all out to the place where it circles and clouds and rains again to the earth. This is my calling, I say. I say. This is not a forgetful thing, but a strong, powerful, fiery thing! Let it all out! It is beyond ! It is the power of the dance, of the forceful pounce and tumble. I have become the grace of fire, the density of the elastic.

The cat applauds and says: not yet… not yet. You aren’t ready for this power. You want to make it simple and clean, but it’s not. Tear the meat out, he says. Be fiery and strong and MEAN it. You can’t ride me. Cultivate me. I will teach you. Then I say, what would you have me do? BURN it. Burn the whole pilgrimage and let it die to itself. That is the only way.

The sky, the mountains and the waters, he says. Burn it all. Let it out! Become the fire!!!!

That is good for now. You are ready to re-enter the world. Do it faithfully and step-by-step. You can do it.

Thank you, Big Cat. You're very kind, and you're very needed.

So, some reflections on what I'm sure was odd to you. First, notice that active imagination like this happens in the midst of writing. It was only revised for grammar and spelling; not much was altered from the stream-of-consciousness state. The writing is the imagining; the imagining is the writing. Second, observe that speech and in it are fluid. That's because in the imagination, description and speech bleed into each other. And finally, notice that Big Cat didn't always respect my wishes. When I tried to "stand up straight," he thought I went too farThis happens often -- these figures of the imagination resist my conscious wishes and will tell me so point blank.

Moreover, this particular figure (Big Cat) is likely a figure associated with the energies of the body ( masculine embodiment), which I've resisted. That's why it was chasing me. It isn't just in my mind, though. It would appear in other people's minds, although it would likely take another form and clothe itself in the details in that person's memory. This is just another way of saying that the figure is a kind of "current" that only surfaces in different ways. It has an identity because it has a similar "feeling tone" in each one. It's big, bulging, forceful, powerful, and dense, whether he's a cat or a wrestler or the Hulk.

Anyway, overcome your hesitation and try something like this. They're very accommodating hosts, the figures in your imagination. You've got nothing to lose.
Posted by Christian Swenson at 1:20 AM