The Book of Mormon as Conversation

So the Book of Mormon is written entirely in first-person. Never is there the anonymous, omniscient "and God said" of Genesis, Leviticus, and Job -- you always know who the author is, and it advertises that fact on the very first page, in the first words: *I, Nephi* wrote this record. 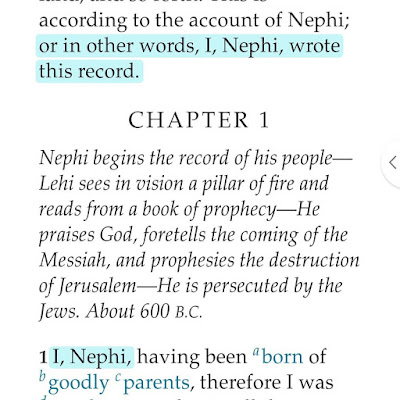 And this goes deeper than pronouns. Anyone without an ideological agenda can tell you that Mormon sounds different from Nephi, that Nephi sounds different from Jacob. Mormon is the historian, as cut-and-dried as David A. Bednar's bullet-pointed, thoroughly organized General Conference addresses. One can imagine Mormon putting his styluses in obsessive-compulsive rows before he uses them to engrave the plates. Nephi, on the other hand, is more involved. He reads more introspectively, more emotionally, than Mormon's dispassionate spiritual history. Jacob seems almost bitter at times. Alma the Younger is the most intelligent author in the text. Moroni seems more otherworldly somehow.

To me, this first-person character implies that the Book of Mormon is a kind of conversation -- with itself, with Joseph, and with us. The book itself is a gift, a gesture, what occurs when one of numberless concourses of angels gives you a book to read, when your father bestows the sacred records to your keeping, when you dig up ancient golden plates, when a couple of nineteen-year-olds show up on you doorstep. This invitation is an irruption, a rip in the fabric of what makes sense, an opening to heaven. It's a challenge: "Read it! I *dare* you." And we respond to this invitation, participate in this conversation, by accepting that challenge, by reading the Book, by letting the Book change you, change your world.This is a chain, a system of concatenated strata, formed by invitations to read and acts of reading. The Book becomes itself through those levels, through Mormon, through Joseph, through *you*. Always becoming different, always blossoming, always transfiguring. It doesn't lose itself this way. It *is* this blossoming, this perpetual re-visioning in and through the reader. It's what lives through death. It's *resurrection."
Posted by Christian Swenson at 11:43 AM