The Book of Mormon, UFOs, and the Learned Man

The Book of Mormon origin story is admittedly hard to swallow. A guy from upstate New York uncovers a set of golden tablets conveniently located in his neighborhood, which he then translates with a weird breastplate-spectacle thing, and which he then conveniently loses. It's actually kind of absurd. But that doesn't stop millions (including myself) from believing in it. Does that make me, x convert from Guatemala, my ancestors from Copenhagen, Philo Farnsworth (the guy who invented the TV), and Mitt Romney idiots? Richard Dawkins has gone on record for saying so. But the situation is deeper than that. 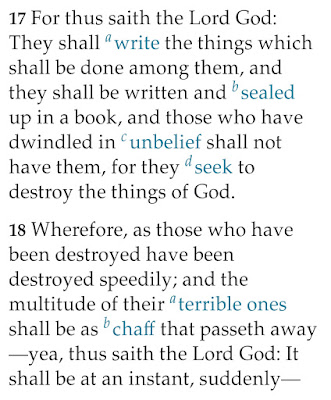 For even if the Book of Mormon's origin story is absurd, that doesn't stop the alternative explanations from also being absurd. For even if we admit that the Book of Mormon has no historical evidence (something I'm not ready to accept), the *fact* of its text, just on its own, is an insurmountable mystery. It is remarkably consistent with itself. There is a coherent timeline, a coherent geography, and consistent voices throughout the text that often reference each other as if they had other texts in front of them while narrating. To create it on his own, #JosephSmith would have had to have charts, maps, and notes, but the witness reports we have to the translation process say he didn't. He just dictated, line after line, indefinitely, and picked up wherever he left off. This is a human impossibility (one, by the way, that has also occurred in other places, as with the book #ACourseInMiracles) And, of course, there are the witnesses to the plates themselves. You can believe that all these witnesses are part of a grand conspiracy, but that seems more like every other conspiracy theory when you think about how all these witnesses kept to their story even after some of them apostatized. This is a realm of study where the “rational explanation” isn't rational at all. There's nothing rational here, on either side.

And that, actually, seems to be the Book of Mormon's point. No one shall have it to get gain, in other words (and to paraphrase 2 Nephi 27), since as soon as anyone tries to grasp it rationally (apologist or skeptic) they leave gaping holes in their argument and lose it again. The Book of Mormon is slippery, something that can't be explained, a gaping hole in any rational account. More, it seems to *want* that. It wants to be unseen by those who wouldn't benefit from it. It wants to carry on its work in a way unchecked by rational skepticism, in a way that actually dismantles skepticism from within
This conceit of the Book of Mormon is, surprisingly not unlike the UFO abduction phenomenon. As the late #TerrenceMcKenna pointed out in his lectures, these accounts seem absurd, yes, they seem comical, clichéd, even inconsistent, but this absurdity is a mask that allows the rational skeptic to dismiss and therefore pass by them. These skeptics don't see, don't feel like they need to see, that abduction stories are common, *shockingly* common, and that even if we don't believe them literally, they need to be taken seriously. But, says McKenna, maybe they don't want to be looked at too closely, at least not by rational investigation. Maybe they want to demonstrate that rational science can't account for everything, to exaggerate the bias of scientism that would otherwise be invisible, to deconstruct its patriarchal, logocentric model at the core. And as McKenna points out, this is like what happened 2000 years ago at Golgotha. The early Christians were simple and naive, not the educated, cosmopolitan, rational cynics in vogue in Rome. Romans were materialists, remember, were skeptics, didn't believe in any higher power. But all of a sudden, their servants started whispering about a man in Judea who rose from the dead. These Roman cynics would have dismissed Christianity out of hand as sheer stupidity. They would not have seen that, within two centuries, it would be their state religion, and that within five, it would have deconstructed their whole empire. Christianity, like The Book of Mormon, like UFOs, hissed forth and did its work unseen, (often literally) underground, changing minds and moving souls in a way that rationality can't understand and therefore can’t confront.

For the book Dawkins rails against isn't the book I read. The book I read is a phenomenon of feeling and will, not of the dried-up, two-dimensional intellect severed from feeling and will. And this will-reality, this quality of feeling, seethes beneath the surface of rational consciousness like a root beneath a sidewalk. And it will break it open. It will dismember the numb intellectual husk we've made the world to be and reveal the gold of will and feeling buried under it.
Posted by Christian Swenson at 11:00 AM