The Inner Meaning of Harry Potter

So I’ve been thinking a lot about the deeper meaning of the Harry Potter series by JK Rowling. Harry is the *boy who lived.* What does that mean? He's the one who, despite all odds, faces pain, faces vulnerability, faces *death* head on. He doesn't hide from it. He bears the mark of trauma as a scar, a scar on his forehead, the place of consciousness, of sight, the prefrontal place where we are ourselves with others. He *is* this pain, he *is* this vulnerability, this weakness, and it is only because he does not "fly from death" that he is able to live, and moreover, that he is able to love. For love is what happens when you face death, and the dissociation is what happens when you flee from either.

And dissociation isn’t just something that happened to Voldemort. We each “fly from death” whenever we refused to feel the dull ache within, the trauma of our childhood that we’ve forgotten which nevertheless affects our gestures and our gait, causes us to repeat it endlessly and unconsciously. Evil, in fact, *is* the unwillingness to feel pain. And whenever we turn away from it, fly from it, He Who Must Not be Named shows up. Quirrel, the awkward stutterer, is the ungroomed recluse who you would feel scared of if he showed up to school in a trenchcoat one day. He is the abused who becomes the abuser, the one whose pain has become malevolent. And so Voldemort *naturally* appears in the back of his head-- the primal brain, the part that acts and doesn’t reflect, what compels, what addicts, what cuts and drinks and abuses -- not the forehead, not the Prefrontal Cortex, not the place where, in full consciousness, we feel our pain and our vulnerability. Harry suffers, suffers consciously, and so he can love. He loves, and so he can bear the reality of touch in a way that one who hides from their pain can’t. 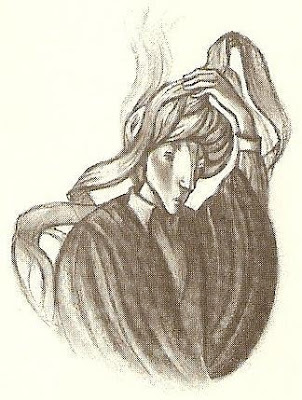 This story repeats itself, in a different octave, in the second entry to the series. When Harry descends into the Chamber of Secrets, he faces the primal terror lurking beneath, what we refuse to look at, what will turn us to stone if we look at it, what inflicts the freezing motion that a rabbit, likewise, would undergo if it saw a fox. This paralysis is the unexpressed motricity of the fight or flight response that appears as muscle tension, what, whenever it occurs, is symptomatic of unfelt trauma. Our shoulders stiffen and never relax again. We try to calm them but feel ourselves, once again, drawn by an unconscious magnetism to the stiffening of a startled cat with an arched back. For trauma will repeat, will attack, in compulsive and ever-worsening ways until we face it, until we descend into the substructure of Being, of our own being, and rescue what it stole: the virgin, "Ginny," the virginal, soft, innocent aspect of our being that had long since been under trauma's thrall, our very own soul, our "anima." And that's not easy. You have to face the trauma, face the snake that slumbers in us, the Kundalini serpent in our nervous system that, left unexpressed in its depths, makes us destructively act out our traumatic experiences, and come out the other side. You have to die. The muscle tension in you, the seething panic in reptilian brain that hides and pounces and eats, must be felt for the pain that it is, not numbly, not as “ever-present,” but with the sharpness and intensity of the original pain. This is, perhaps, best expressed by the feeling you have when, crossing your legs in Zen meditation so that the ankles lie above the thighs, you feel a stabbing pain that is, nevertheless, only the habitual muscle tension in your legs turned up tenfold. Wincing, you relax them, and then you realize, that, wait, you *can* relax them, that *that’s* what peace feels like. You had forgotten, and it was only your capacity to face your pain multiplied to a visible caliber that allowed you to remember, to soften. This is killing the snake; this is rescuing Ginny; this is the birth of love, of touch, facilitated only by our capacity for death and rebirth, our phoenix nature, the human ability, which we all to often forget, to endure pain that feels like it will last forever and discover its other side.

Lastly, this last entry to the series narrates this same story transposed to its ultimate level. Harry must die. He must take the part of him that seethes against vulnerability, his microcosmic, inner Voldemort, his own “flight from death,” to the gates of death. He must shed the cloak of invisibility and bring Voldemort to where he won’t go on his own: to the brink of eternity, to the cosmic Kings Cross Station, the veil, that divides this world from the next. This is the place where you meet your higher self, what some have called the Guardian at the Threshold, where Voldemort, who flies from death, can only ever see himself as a dessicated husk who has wasted this life whose purpose *is* to die. But Harry, who is unafraid of death, lives again. And that is the great secret. Insofar as you die, insofar as you lose yourself, you gain yourself again, are resurrected. This is the truth of Harry Potter, what makes him *the boy who lived*: don’t pity the dead, pity the living. And above all, pity those who live without love.
Posted by Christian Swenson at 11:52 AM