So I know next to nothing about the medical marijuana proposition on ballot in Utah, the one that the Church has recently decided to urge its members to vote against. However, lots of people have been posting about it on Facebook, and I want to tell you what I've noticed about those posts and what *they* tell me about the situation. 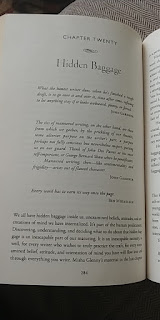 But first you need to know about the effect *baggage* has on writing. Baggage is a word Stephen Harrod Buhner uses in his book Ensouling Language to describe an emotional center of gravity in a text, a kind of black hole, that affects the word choice and sentence structure. It focuses on one thing a little too much and not enough on another. There are gaps, little bits of displaced, diverted attention, which let you know there's something the author doesn't want to spend too much time thinking about. It's like how the closeted gay guy in church laughs a little *too* hard if someone makes a gay joke - everything around that black hole is emotionally distorted. There's a feeling of "don't look here!" but one that, too the right eyes, is all the more suspicious.

For instance, take this passage from a book called "The Forgotten Pollinators", analyzed in Buhner's book:

I took a swing at an extremely fast-flying gray blur of a bee, but missed. It was a male digger bee. It was an old friend to me: a big gray Centris pallida female, a harbinger of spring. In fact, I began studying the mating habits of this species with another friend, entomologist John Alcock, nearly 20 years ago. . . . I then swept up as many kinds as I could capture that day, recording their nectar sources and periods of activity. Back at the Arizona-Sonora Desert Museum at day’s end, I dumped my catch onto a piece of notebook paper and sorted the pile of now quiescent bees into groups to show Gary. . . . In all, during just a few morning hours, I had collected solitary and primitively social native bees belonging to 6 families, 20 genera, and perhaps as many as 50 different species. . . . The possibility of nabbing something new to science—by intensively sweeping our nets through the canopies of even the most common tree—was not an unrealistic expectation for the day’s bee hunt."


Notice the words he uses to describe his "bee hunt": "took a swing," "swept up," "dumping a catch onto a piece of notebook paper," and even "nabbing." The bee is an "old friend to me." As Buhner puts it: "The way the material is written conveys a picture of a happy-go-lucky sort of guy, just hangin’, knockin’ back some brewskies, playin’ a little badminton with the guys, and catchin’ some rays . . . and a few interestin’ critterz, too." By compositional sleight-of-hand, he's diverting attention away from the fact that he killed the things. There's a counterbalancing, concealing shift in emotional weight that tries to hide that grim truth (which, as he knows, the reader may not understand) with a carefree, chill persona.

This thing happens all the time. Richard Dawkins is an expert at using hidden baggage: once, when asked if religion could fulfill a human need for belonging and purpose, he responded that "Well, there may be a profound need to *understand.*" Of course, understanding is *not* beauty, is *not* meaning, is *not* purpose, but Richard Dawkins (who only felt "slightly dizzy" when he tried on the "God Helmet," by the way) doesn't want to even come close to considering the role of irrational factors in human well-being, and so he always shifts attention away from the biological significance of religion, affect, and value whenever they come up. Those topics clearly make him uncomfortable, but he probably doesn't even admit that to himself. He'll just sneer and glare at you if you bring it up.

And it shows up online. Whenever there's a pithy, vaguely witty appeal to a clichéd ideal or moral imperative, you can tell that someone feels insecure about their position and wants to shout down doubt, to clarify their position to themselves with a shareable image macro. It happens on both sides of the political spectrum, of course: quotes by general authorities and John-Wayne-esque "I can't believe how stupid these millennial pansies are" posts are just as common as vacuous New-Agey, feel-good mantras and any excuse for SJW outrage (I'm realizing just now that I have a diverse friend group, haha). In each case, someone with ill-defined opinions, someone who knows how they *feel* but not what they *think*, is relieved when they find a post that they agree with, which tells them how to express what their feeling intellectually, and with a surge of dopamine, they click share.

And this, in a more subtle form, is what's happening with Proposition 2. People against it generally fall into 2 categories: 1) people who just share the email or LDS Living links without comment, and 2) people who try to defend the church's controversial actions. The first might not know about the controversy at all; they are just doing social media missionary work like general authorities encourage us to do. They're trying to help, and even if they don't, their heart is in the right place. Don't get mad at the widow for her mite, guys. The second are aware of the controversy and try to defend the church's position. They tend to look at the nuances of the bill, from what I've seen, partially because the Church has also taken a nuanced stance (apparently they're *for* another medical marijuana bill) and partially because it's hard *not* to look at nuances if you want to defend a controversial political decision by the church.

However, from what I've seen, those for the bill and who criticize the church tend to lack any and all nuance. The sentiment seems to be something like "The Church is violating the separation of church and state" or "Medical marijuana is obviously good, and the church is against it, so it must obviously be bad." I haven't yet seen a post by someone for the bill and against the church that addresses the nuances and technicalities that the apologists point out. Of course, they almost certainly exist, but I'm not trying to say they don't. I *am* pointing out that, by and large, there's some baggage in these anti-church posts. They're not calm or reasonable. They have the air of mob mentality. Not thought, but feeling *masquerading* as thought, thought animated by unconscious feeling-baggage, is what's talking.

Of course, I could be wrong. I could be the victim of my own confirmation bias, my own baggage. I could be seeing things.  I suspect not, though. And here's one reason why: most of these people are ex-Mormons. I have long said something that, although not entirely accurate, names a trend and allows us to see it: that you can never stop being Mormon, that if you try, you'll only ever prefix it with an "ex-." ex-Mormons of a certain (common) type are the most religious of folks, even if they're atheists. They care as much (if not more) about the Church now than they did while they were members. A self-aware, beloved ex-Mormon friend of mine once satirically impersonated the r/exmormon subreddit by saying "Guys, did you know Joseph Smith didn't even prophet?? ... I *know*, right???!!" The whole subreddit is a vile, self-indulgent cesspool where people revel in their (valid) trauma instead of trying to process it. But, as all trauma tends to, it repeat itself unconsciously. Just as the abused often becomes the abuser, the persecuted tend to become the persecutor. The Church fits that bill, as does Christianity at large and (dare I say it) the LGBT movement. Each hasn't given up its defensive mentality even when it's in political power. And so it makes new enemies, which, themselves, go on to make new enemies in time, and so on ad infinitum until the world drowns in a wave of strife.

Can we just process our traumas without trying to eke revenge out of those who did them to us? That doesn't solve anything; it traumatizes others and ends up re-traumatizing you. Get off Facebook and go see a therapist.
Posted by Christian Swenson at 1:07 PM