How to be Good

Someone fully taken over by the wetiko bug is like a kitten endlessly reacting to her reflection in a mirror, thinking it is another kitten separate from and other than herself, as she becomes conditioned by her own energy. Wetikos react to their own projections in the world as if they objectively exist and are other than themselves, delusionally thinking that they have nothing to do with creating that to which they are reacting - Paul Levy, Dispelling Wetiko

While Lucifer sucks the juice out of the lemon, as it were, Ahriman presses it out, thereby hardening what remains. - Rudolf Steiner, Inner Impulses of Evolution: The Mexican Mysteries and the Knights Templar

I was a hidden treasure; I longed to be known. Hence I created the world so that I would be known. - Islamic Hadith

There are only two principles: goodness and truth. Goodness is merely the desire for truth; truth is what goodness desires. Anything true is desired by goodness; anything good desires truth. 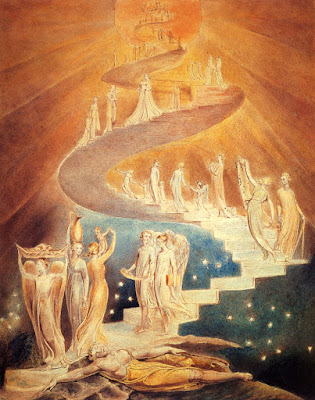 But the priority between love and truth can invert itself. Instead of goodness loving truth, through a slippery slope, "what is" determines the desire for it. You think “Ah! A wild x appears! That must be what I want.” In this inversion, you think that wherever you happen to be is all there is to life, which does not at all follow. This "wherever you happen to be" is what Swedenborg called a falsity, and the desire for it is what he called evil. When George Bernard Shaw said that “patriotism is … a conviction that a particular country is the best in the world because you were born in it,” he wasn’t just being polemical. Nationalism and bigotry happen because we assume that the falsity of the “here and now” is more important than the "thee and then" because it's here.There's no problem with your country; it may be great, but it's not great because you were born in it. Likewise, your football team may be the best, but it's not best because it's your hometown's team. If you fall into the trap of evil and falsity, the near swallows the far and the now swallows the then.

But wickedness was never happiness. Desires always have goodness at their heart, but they have become hypnotized by falsity and fallen in love with that hypnotism.  If we really want to be happy, we’ll desire what really fulfills that desire, not the convenient, falsified substitute. Every sinful desire, its impulse purified by the truth's context, becomes a virtue. You will not be angry but instead zealous; not lustful but full of everlasting burnings; not egotistical but boastful of God. And this desire, this love, isn’t exclusive to you. Really, anyone’s joy is your joy. The good of each is the good of all. With this shift of perspective, scarcity vanishes. You live as anyone that you talk to, that you see on the street, on TV, or in the history books. This love living in you plays our near and far. It is not constrained by “here” and “now.” It takes no thought for space and time.

And yet space and time are not evil; they are merely the source of evil, and this is only because they appear to separate us from each other and lead us to think that we really are separate. But we are not. Space and time have been in charge, but they belong in the back seat. Space and time are truth, but truth should serve goodness and not vice versa. Then, no longer constrained by where I happen to be, I can finally enjoy where I happen to be. The here and now become a gift instead of a compelling burden. The present ceases to be a fleeting treasure to be hoarded; it, like every other moment, reveals itself as the face of God. The universe becomes transparent, no longer an opaque war of each against each.

So, "how to be good?" Love truth, not abstractions. That is, love the twisting, folding, mutually implicating play that is life itself and not the wooden substitute of your own thoughts. Don't love one side of an arbitrary line over another, whether that line be a fence between countries or your very skin. Put in a different way: don't give up on what is, and don't give up on your happiness. These two great evils are based on the falsity of a crude opposition between truth and goodness, between reality and our longings. We either resign ourselves to being life's slave or try to make life our slave. We must conquer or submit, no in-between. But God isn't a slave driver, and neither are you. Life isn't a chess game. It seems that way because of the wide spaces and long stretches of time in this world, but these emptinesses and intervals, seen properly, do not separate but unite. Imperfection, like the space between the eyes of two people in love, is the absence that allows presence. If you get rid of ol' imperfect you, God has no reality to love. And if you put yourself in charge, you become as lonely as a God without creation.  In neither case are you together. One is the loneliest number, but two - and the emptiness that two needs, is company. And that's the truth.
Posted by Christian Swenson at 8:00 AM