The Use and Abuse of the Law of Attraction

In the coming years many ways of working with the symbolic world will become known to us. This is part of the knowledge of the coming era that is gradually being made accessible. We will have the opportunity to make our own relationship with our symbolic nature, discover its ways and allow it to teach us how to work with its energies. We will learn how to reestablish a symbolic consciousness through which all of life is an interaction with the divine, a meeting of the inner and outer worlds. What is important is the attitude we bring to this work, that we are in service to the whole rather than following our ego and imposing its desires. Working with the inner world requires listening, patience, and receptivity. One must allow the inner to communicate in its own way: watch, listen, and be responsive to the feelings that are evoked. This is the ancient wisdom of the feminine, which has been so repressed. Part of this deep wisdom is also respect. In previous eras it was understood that through our symbolic consciousness we are given access to the world of the gods.The gods should be approached with respect. We also need to bring an attitude of humility, because we are encountering a world as ancient as the universe which contains the wisdom of the ages. Interacting with the inner world, we are the ones who need guidance and help. The ego should not try to determine the outcome of such a meeting. Indeed there is a particular danger for those who approach the inner world without the “wisdom of humility.” Carl Jung called this “inflation,” when the ego identifies with the energy of the inner. It is easy for the ego to think that it is all-powerful, that it is a magician. The story of Doctor Faustus tells of the danger of using magic for the power purposes of the ego. The inner world is a source of unlimited energy and power. The ego can become attracted by this and try to use it for its own purposes. Entering the inner world, we are exploring a new dimension, and there is the potential for the wondrous and unexpected. But for this encounter to be fruitful, the right attitude is necessary. If one meets a unicorn one should not try to cut off its horn for its magical properties, but rather greet the wondrous animal with respect. Many fairy tales stress that the attitude with which we approach the figures of the inner world determines their response. The stepdaughter who greets the gnomes with kindness is rewarded with magical gifts, while the daughter who seeks these figures for greed receives a curse. In previous ages it was only the initiates who were allowed direct access to the inner worlds. Part of their training was a process of purification and testing to determine whether they had the correct attitude. The elders knew the dangers—not just to the individual but to the whole community—of interacting with the inner worlds with the wrong attitude. If we are to reclaim our relationship to the inner, to learn to live our magical nature, we need to take full responsibility for our attitude and our actions in the outer and inner worlds. What is not generally known is that many places in the inner world are as polluted as the outer world. Our lack of respect for the inner has corrupted its magical realms. Every time we access the inner with a desire to get something for ourself, we desecrate it. Like the base camps of Mt. Everest, now littered with the refuse of hundreds of expeditions, our quest for a spiritual “high” has polluted the inner realms. Decades of this desecration, culminating in recent new-age practices that seem to encourage visiting the inner for the sake of one’s own personal knowledge or gains, has left the inner worlds crowded with the garbage of spiritual materialism. The dense wasteland of debris created by our own egos inhibits light and energy from flowing to the outer where it can bring nourishment and meaning into life. Forces that should flow outward turn back on themselves, contributing to the darkness and negativity of both worlds. The shamans, who were trained to keep the inner dimensions clean, have mostly disappeared. Now the only way to help clear out some of this pollution and open pathways between the inner and the outer is to approach the inner worlds with deep respect and humility, in service to the whole, wanting nothing for ourself. - Llewellyn Vaughan-Lee, Spiritual Power 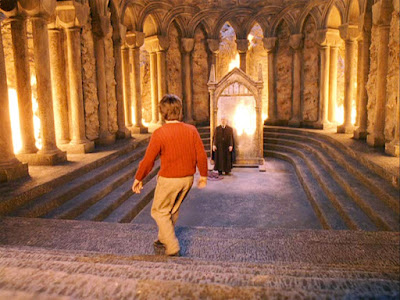 Now the basic principle of all white magic is that no power can be gained without selfless devotion. When through such devotion power is gained, it flows from the common life force of the universe. If however we take its life-energy from some particular being, we steal this life-energy. Because it belonged to a separate being it densifies and strengthens the element of separateness in the person who has appropriated it, and this intensification of separateness makes him suited to becoming the pupil of those who are engaged in conflict with the good powers. For our earth is a battlefield; it is the scene of two opposing powers: right and left. The one, the white power on the right, after the earth has reached a certain degree of material, physical density, strives to spiritualise it once again. The other power, the left or black power, strives to make the earth ever denser and denser, like the moon. Thus, after a period of time, the earth could become the physical expression for the good powers, or the physical expression for the evil. It becomes the physical expression for the good powers through man uniting himself with the spirits working for unification, in that he seeks the ego in the community. It belongs to the function of the earth to differentiate itself physically to an ever greater degree. Now it is possible for the separate parts to go their own way, for each part to form an ego. This is the black path. The white path is the one which strives for what is common, which forms an ego in community. Were we to burrow more and more deeply into ourselves, to sink ourselves into our own ego organisation, to desire always more and more for ourselves, the final result would be that we should strive to separate ourselves from one another. If on the other hand we draw closer, so that a common spirit inspires us, so that a centre is formed between us, in our midst, then we are drawn together, then we are united. To be a black magician means to develop more and more the spirit of separateness. There are black adepts who are on the way to acquire certain forces of the earth for themselves. Were the circle of their pupils to become so strong that this should prove possible, then the earth would be on the path leading to destruction.  - Rudolf Steiner, Foundations of Esotericism

“Let me explain. The happiest man on earth would be able to use the Mirror of Erised like a normal mirror, that is, he would look into it and see himself exactly as he is. Does that help?” Harry thought. Then he said slowly, “It shows us what we want . . . whatever we want . . .” “Yes and no,” said Dumbledore quietly. “It shows us nothing more or less than the deepest, most desperate desire of our hearts. You, who have never known your family, see them standing around you. Ronald Weasley, who has always been overshadowed by his brothers, sees himself standing alone, the best of all of them. However, this mirror will give us neither knowledge or truth. Men have wasted away before it, entranced by what they have seen, or been driven mad, not knowing if what it shows is real or even possible....It does not do to dwell on dreams and forget to live, remember that.  - J. K. Rowling, Harry Potter and the Sorcerer's Stone

“He is with me wherever I go,” said Quirrell quietly. “I met him when I traveled around the world. A foolish young man I was then, full of ridiculous ideas about good and evil. Lord Voldemort showed me how wrong I was. There is no good and evil, there is only power, and those too weak to seek it. . . . Since then, I have served him faithfully, although I have let him down many times. He has had to be very hard on me.” Quirrell shivered suddenly. “He does not forgive mistakes easily. ..." J.K. Rowling, Harry Potter and the Sorcerer's Stone

“Your mother died to save you. If there is one thing Voldemort cannot understand, it is love. He didn’t realize that love as powerful as your mother’s for you leaves its own mark. Not a scar, no visible sign . . . to have been loved so deeply, even though the person who loved us is gone, will give us some protection forever. It is in your very skin. Quirrell, full of hatred, greed, and ambition, sharing his soul with Voldemort, could not touch you for this reason. It was agony to touch a person marked by something so good.” -  J. K. Rowling, Harry Potter and the Sorcerer's Stone

THAT IT IS MAGICAL TO WILL TO MAKE ONE'S SELF GOOD FROM AN EVIL END. To will to become good, nay, to make one's self good, when good is intended, this is good, though it is not known that it is from the Lord; for thus there is received a celestial proprium. But those who wish to make themselves good for an evil end, as of ruling others, of destroying others, and so forth, to these it is magical; the former is from heaven, the latter from hell. A certain one given to magic willed to become good from himself; he hit upon the plan of drawing to himself certain good spirits, and of having them about himself, that they might make him good; but this was turned into hell to him, for his end was to do evil by that means, thus to do what was yet more magical. He was then depressed yet lower, [to a place] whence he could not elevate himself. Hence it is manifest that such a thing is magical; I spoke concerning it that such is its character. - Emanuel Swedenborg, Spiritual Diary 4414

Posted by Christian Swenson at 8:39 PM