The World Between Walls

Boundaries are everywhere. Not only do you find them in buildings, streets, and computers, but every cell has a wall, you have skin, and every bug has an exoskeleton. Thanks to these walls, there is an "inside" and an "outside." But what would the world be without these walls? There would no photosynthesis to absorb light; there would only be light. There would be no animals that drink water; there would only be water. Without walls, there would no "place" at all. In order for there to be place, you need a "here," and you can only have a "here" when you divide it from a "there" by a boundary. Apart from walls, there is only "here-there," a reality where both imply and exist in each other. There is only a "between." 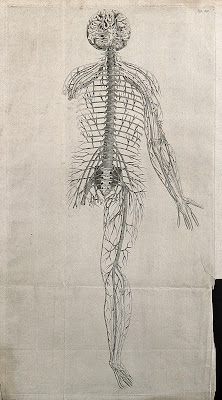 Insides and outsides aren't real in themselves. You couldn't eat anything or see anything if this division were absolute. Your eyes are places where inside and outside meet and the "between" gets revealed. This is true of every part of your body that opens to the outside world. Just like you need a wall of skin, you need holes in that wall. And the walls of life correspond to the between. My skin follows the flow of my blood vessels, and my blood vessels follow the flow of my blood. The eye "traces" the reality of light itself. Since they depend on a current that exist on "both sides" of inside and outside, all organisms are merely elaborations of the "between" that existed before it did.

As such, life is what happens when walls follow the between. Moreover, this means that I am not just my physical body. Sight isn't just the physical eye; sight is the between of light that happens through the eye. So too with me: I am not my body but the between that happens through it. And as there has always been light, even if there was no eye to see it, so I have always existed in some way, even before my body did. Just like an apple tree produces fruit, I am the "fruit" of the world's between. This between is a sea, where currents have sub-currents and sub-currents have sub-sub-currents. It is normally invisible. In fact, this between-world can only become visible when there it makes use of already existing walls to elaborate itself. Before you could exist, there needed to be people, and before people could exist, there needed to be animals and, before that, life itself. But as a between yourself, you've always been latent in world's between. You've been building your body over billions of years.

Thus the pre-existence didn't happen in another world at all. It is this world, only regarded as to the between that hasn’t yet expressed itself in visible walls. So too with the spiritual world: it is a world of the between, the inside-dash-outside that has always existed and will always exist. And within all of this, divinity is the between itself. It is the current all other currents express. The world is its revelation in the same way that the eye is the revelation of light. So are you.
Posted by Christian Swenson at 11:16 PM