Why Losing Truth Can Be a Good Thing

To save your life, you'll have to lay down your stories and, minute by minute, day by day, give your life back to him. Preferring your stories to his life is sin. - Adam S. Miller, Letters to a Young Mormon

Any truth - any truth - must be grasped gently, taking care that the fit between the world and the idea is proportional. We have to be ready to let it go as we and the world we inhabit change. - Tom Cheetham, All the World an Icon: Henry Corbin and the Angelic Function of Beings


In Emanuel Swedenborg's Arcana Coelestia or Secrets of Heaven, he embarks on a project to explain the "inner meaning" of Genesis and Exodus to his readers. Some of these "secrets" or "arcana" are hard to understand, but I feel eager to share one of them with you today: the inner meaning of the moment where Pharaoh wakes up from his dream about good cows and bad cows. 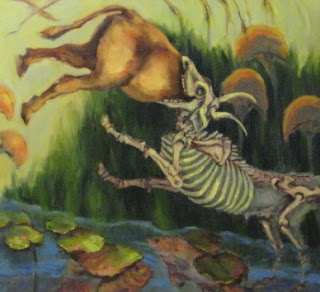 First, some context. Context is everything for Swedenborg's interpretation of the Bible - an image or a person signifies a spiritual reality only because of the way that image relates to other images. It's all based on relationship. For instance, what does "Pharaoh" signify? Swedenborg  says that he represents "memory-knowledge in general." A "memory-knowledge" is just truth in the "natural" level of the mind, basically the Book of Mormon's natural man. Ken Jennings has a lot of memory-knowledges. They're trivia, factoids, data: any definite answer you can give to a question. The Pharaoh is the level of your mind that can win at Jeopardy.

In the dream, there are seven bad cows that eat seven good cows. For Swedenborg, these good cows are "truths of the natural" and the bad cows are "falsities" there. So just as the Pharaoh is the mind that thinks in facts, these cows are the facts themselves: a group of good ones and a group of bad ones equally matched. To put it more relevantly, these cows are thoughts. They're the concrete thoughts you get to do a certain thing. The good cows are a thought that says "you should do your homework," while the bad cows are thoughts that say "no, you can play that video game for five more minutes." The first thought is true; the second thought is false.

Clearly, something's gotta give. This stalemate needs to be broken; someone needs to tip the scales. This will be Joseph: what Swedenborg interprets as the "celestial of the spiritual in the natural" (say that five times fast!). In brief, Joseph is an unspoken resolution to do good, a feeling you have bursting within you that wants to go out and help make the world an image of heaven, perhaps not using these words, but which surges out of your heart with golden-gooey fire and feels fond of everyone. This is an urge or an impulse, not yet something actualized. In other words, it's not recognized by that natural, Jeopardy-champion level of your mind. But then it descended into the prison there to cast aside the baker (the origin of those instinctual, let's-eat-cake thoughts) and elevate the butler (the origin of those intellectual, don't-eat-cake thoughts) by his insight. That is, it was Joseph that broke the stalemate between instinct and discipline inside your mind. But even later, when the residual thoughts from the impulse eat cake (the baker transposed into the bad cows) still remain and are apparently powerful enough to entirely displace the good thoughts (eat the good cows).

Swedenborg says that that's the way it's supposed to happen. Why would this be the case? It's because these good thoughts are becoming deeper and less concrete. They're burrowing into the more profound, less visible parts of your mind. For when you say "Let's not eat cake," is that always true? Maybe it's good to eat cake sometimes. Maybe you have problems with sex addictions, but sex isn't always a bad thing either. In short, that thought you had that said "Do this good thing" or "don't do this bad thing" is an oversimplification. Sometimes what looks universally good on a general level has bad side effects, and sometimes bad things have good side effects. And the nuances aren't always so clear-cut. What kind of cake is it good to eat? Carrot cake? Chocolate cake? When you discover this, this newfound relativity might make you think that there is no good and no evil but that "thinking makes it so." Wrong! Instead, what you're noticing is that the good thoughts are slowly becoming like a projector: close up, the image on the wall is blurry, but far away, you can see the nuance there. The "far away" is the internal "feeley" level of your mind; the thoughts are the projector; the wall is the Jeopardy-champion level of your mind. Though the familiar blur is gone, eventually it will reconcile into a greater, more accurate truth. That is, the simple fact "You should never eat cake" becomes something like this: "You should eat cake at parties and other get-togethers, occasionally from left-overs, but not often." This longer sentence is a more high-res version of the simple "Never eat cake." It fills in detail where the shorter one generalizes.

This realization of the nuances is what the Pharaoh "waking up" symbolizes. In that "dark night of the soul" where bad thoughts dominate and there are no good thoughts to fight them, it might seem like it's best just to abandon to relativism and let the bad thoughts win. You think "The clearest thought I have is that I should eat cake! Why do I find it so hard to avoid that temptation?" This is the state symbolized by the bad cows eating the good cows. But light is coming. What's really happening here is that the good cows, the good thoughts, are dissolving and becoming stronger on another plane. They explode into pieces and suddenly become refracted into an army of cows, an army of thoughts (or a store of grain, as the case may be). So don't give up hope! The death of a cherished truth means that it's becoming a legion of even more powerful truths. Out of (only) one, many.

Posted by Christian Swenson at 4:24 PM