Why the World is Waking Up

The world is changing. And not just in the way you think -- even with the horror that's happening in the world politically, there is something beautiful bubbling up to the surface. This beautiful thing is bright, warm, and big. And it is becoming more and more apparent for those with eyes to see. 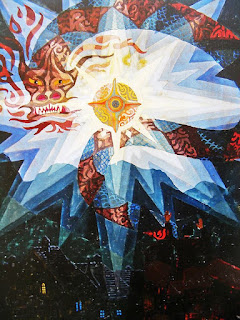 It's true that the world looks hopeless right now. But that's the darkness trying to distract you. It wants you to become hopeless and discouraged. That would make it stronger. But the light is rising, and nothing can stop it.

And I have some evidence that this is the case. About two years ago I consulted an inner figure named Aurora in active imagination. Active imagination is where I enter a state akin to daydreaming and converse with the figures who emerge and write everything down. I usually just talk to Aurora about my own life, but in this particular session, she became a kind of oracle, predicting the future. And the things she said have come true. For instance, when I asked her:

"What of gay people in the church?"

She responded with this:

A: Those you love will lose their heads over this. The problem of gays in the church will lead to an act of rebellion, of voices crying out from the ground toward forgiveness in the light and reminiscence in the day. You'll see this change come to pass when voices begin to whisper from high places to begin an act of slaughter to the innocent, to re-ignite the flame that caused so much burning hate.

This was in January of 2015, so of course I had no idea that next November the Church would adopt a new policy about the children of gay parents in the Church, which many people did perceive as a "slaughter to the innocent" and which did "re-ignite the flame that caused so much burning hate." When I looked at these prophecies again the following year, I was astounded. She predicted this exactly. So I decided to look at what else she said was going to happen. And I became overawed at what I saw with new eyes.

While I'm not allowed to share everything that was in those prophecies, I can share these prophecies that she made about the future still to come. She spoke of "a flash of intense fiery brilliance," which will "teem at the edges for a while until it grows calm in its resentment toward the light of day." Asking for when it would happen, she said this:

A: It will occur in the even-time, when all things fade into blackness and auroral dimness.
C: What will happen after this dawn?
A: Things will change. The night will become strange, and the desks you work at will become dim and empty. The world will wake itself up to the dance, and all things will come out to play.


And after I asked her about this night that would occur prior to the emergence of the brilliant light she said this:

A: The night is already here, Christian. It is upon us and blackening fast. You will know that dawn is about to break when the emblems of the source come out to meet you in the light of day. Those emblems will herald the new day.

And while I wasn't going to share more, I feel prompted to share this that she said right after, when I asked her about resurrection:

A: The resurrection will occur in blackness and in tongues of words. It will reunite the lost and forgotten with the words that will bring them out into the light. The words will show us the way home to love, peace, and joy.

There are hidden meanings galore in these words. They have hidden implications that I'm still teasing out. But she is clearly saying that this night we're experiencing -- with Donald Trump and international terror and the death of facts -- is actually an "auroral dimness" that will lead to dawn. This dawn will break when the world breaks into a sea of symbols, when meanings pop out of the woodwork and the world comes alive with the life that was always there behind the scenes, waiting for the veils between the worlds to become thin enough for it to communicate to us. This is the resurrection: when everything dead gains life, where the worlds become transparent to each other. When this happens, more and more of us won't care about the foolishness of our concerns. Donald Trump will get more and more absurd, and the world will make less and less sense. But this is the light of higher worlds breaking apart ours like a root underneath a sidewalk. Eventually, the worlds will follow each other's contours, and those who recognize this fact will dance to a different tune, leaving their desks to become "dim and empty." And this change will happen very soon.

For me, "the emblems of the source coming out to meet me in the light of day" are in the thick of their heyday. Everything speaks to me; what Carl Jung called "synchronicities" are happening more and more often. Unlikely serendipitiese happen every day; far more than they ever have. People message me with the same thought I've just had. In every movie and every play I see, there is a hidden meaning in it that speaks to me of my own life. Dr. Strange speaks of how to dance with injury and disappointment on any scale. La La Land speaks of the world overcoming rigidity by meeting "every collision with a kiss." Pleasant Grove High School's Secret Garden speaks of the hidden life coming out of death. The world is entering into conversation with itself, and I am thrust in the middle of that conversation because I am willing to hear. And not just me. My friends have also been having these strange revelations, one of them a vehement ex-Mormon who's rediscovering his spirituality in the most unexpected yet wonderful way. At a performance of Mary Poppins at BYU, something spoke to him in it about his life, which neither the actors nor the writers knew about. He saw a light pop up in the darkness; he saw the world waking up.

So I urge you, reader: listen to the light waking up in the world around you. There are conversations beginning to become louder. They speak to you in random coincidences, the words you overhear in a song, the thoughts that pop into head. Soon the world will begin dancing. Make sure you're one of them who hears the tune.
Posted by Christian Swenson at 1:48 PM